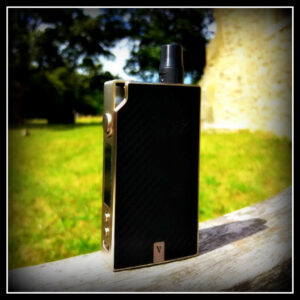 So we’re looking at the Vaperesso Degree this time round, not the newest pod in the vast array that seems to flood the shelves of vape stores everywhere, but is this still worth your money?

Released in the latter end of 2019 it received some very favourable reviews. It had good looks, the ccell pod and the mesh pod, as well as some innovative features, but we will go into that more later on. 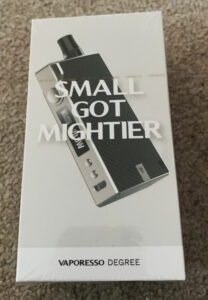 What do I think as I look at it sitting in front of me? Style, lots of style.

It’s not plastic fantastic, there are no disco lights, and there’s nothing that suggests I’m the proud owner of a whale tail spoiler.

A simple solid brushed steel finish with an understated black carbon fibre side panel on one side and a rather nifty Vaperesso logo laser cut into the other side. A simple functional screen, a fire button and two smaller adjuster buttons, simple and clean.

A proprietary drip tip sits atop the little fellow but it’s comfortable in the mouth, and the external airflow means no niggling leaks inside the device. There’s no stopper on the airflow so it will just spin, but I didn’t find there was much movement when I had the Degree in my pocket.

This is a pod you’d be happy pulling from your business suit or pulling out in the pub. Less is more in this case and it appeals to me.

If you want something a bit more colourful then there are options. A monochrome marbled effect, a colourful lava effect, a red marbled effect with a parallel line motif and a blue version of the marbled with lines (and I liked this one too). So something for most people, unless you like disco lights and the ability to check your puff counter by blue tooth (Xcube mini anyone?)

I didn’t get any lanyards but seeing as I don’t ever use them this was no hardship, but apparently, there should be : 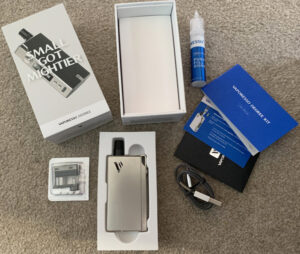 I must say Vaperesso did the impossible with the kit, I got excited by the USB cable, yes I did dear reader and why? It was a gorgeous braided cable, not just braided but a metal braid with spring finishing!! This was possibly the sexiest USB I’ve ever seen, but please take into account that I don’t get out much, and they’ve recently adjusted my medication….. er back to the box…

The usual paperwork and I must say a very comprehensive instruction manual was included along with a nice touch I thought, a single card that explained in a few sentences how to use the Dry hit reminder function.

Simple, clear and concise something other manufacturers could do with looking at. While we’re at it, I’d set this at 6 or 7. It should take the fear of tasting satans nether regions completely out of the picture*.

*Translation: It should stop you getting any dry hits

You can’t see the juice level folks, so this is a very handy function indeed, and understanding it is a must unless you want to be constantly removing the panel in fear of ruining your coil.

Well, he looks good but can we live together?

I’ve tested the suave little devil for 4 weeks now, and I must say this is a very capable and solid piece of kit.

So let’s start with the pods.

The 0.6 mesh pod, I tried 50/50 freebase juice in at first and it handled it really well, good flavour, reasonable cloud and wicked a treat. Where this shined for me was when I tried a nic salt in it. Game changer!!, great flavour, good clouds and the wide-open airflow (restricted DTL) gave me a warm vape at 22 watts that had me giggling like an idiot ( I blame the extra nic).

Was it as good as say the boost or Drag X? No, BUT this is an older device and the flavour is very acceptable on par with the Vinci I’d say. 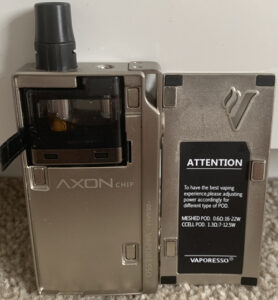 Now the 1.3 ccell pod, I don’t MTL….period….. well I have just fibbed now…. The Degree made a liar out of me folks. I really don’t like MTL, but I bit my lip, filled the pod with the delicious Up all Night from Jack the dripper 20mg nic salts and tentatively took a pull at 12.5 watts. Tightened up the airflow until I got a tight draw….. Magic….I tell you there was voodoo at work. The flavour was brilliant, rich coffee, the creamy notes I remembered when I’d reviewed it, and a lovely throat hit.

I was so impressed I spent a very enjoyable afternoon puffing away like Hugh Heffner on his favourite pipe watching Highlander. Unheard of at the Hodson hovel, MTL who knew?

The unit is very comfortable in the hand, with a natural feeling fire button position, did I mention the weight? This is a heavy chap, not overly so but it feels like you have a solid quality pod in your hand. To be honest the thought of this on a lanyard would have me fearing for the safety of anyone who was around 5 ft tall. If you swung around you’d probably cave in their skull!

The screen was a joy to read, and while small all the information you need is displayed and the information is crisp and clear. A nice touch is when charging, the screen shows how full the battery is as a %. The screen specs are: 90.5mm x 41.5mm x 16.45mm / 0.69” OLED Display

Speaking of charging I timed the battery as 0 to 100% using a USB plug and the provided cable as just under an hour and a quarter, not the quickest but still very acceptable for the 950 mAh battery. I was getting around 1/2 of a day using the 0.6 pod and just over a day when I was using the MTL pod, and I do chain vape. I was very happy with the performance and a less frantic vaper should get at least ¾ of a day from the Degree using the 0.6 pods.

Clean, simple and stylish. A well put together pod indeed.

The Degree shines in my opinion for MTL, but don’t get me wrong it can produce a very nice restricted DTL vape too. You’re not going to get the depth of flavour from some of the newer AIO / pods but to balance your not going to be paying that price tag either. The flavour is solid especially with a good nic salt inside.

The firing was instant, and while the degree will fire up to 30W you’re never going to be able to go over 22W with the 0.6 pods or 12.5W with the 1.3 MTL. It did annoy me at first, but looking on the bright side your not going to accidentally fry your coils. I did wonder whether there may be a third lower coil on the design board, but I would have thought we’d have seen it by now.

My gripes? Well, they’re objective as I struggled to find anything catastrophic.

Personally, I wasn’t a fan of the push to fill juice system. It works, and there was very little mess, BUT….. the pressure you need to exert on the valve did cause some problems with less sturdy nic salt bottles. If you use the 10ml bottle provided it solves the problem, I can’t help feeling though that a little more time spent on the valve would have solved the issue rather than including the bottle.

My only other gripe is more personal. Relying on the low juice level warning, maybe I watched too much 2001 but I don’t like the idea of trusting the machine to tell me when my juice is low. I have had enough dry hits to be wary.

I did find though taking the panel off is easy, they click back securely and the pods are clear so the juice level can be checked in a jiffy should you be as paranoid as I am.

With everything considered, is the Vaperesso Degree still worth buying? Definitely.

Today’s review was by BFG Hodson, you can catch him over on The Soul Ohm Blog.

He also co-hosts a live show and podcast over on the Soul Ohm reviews channel, which you can catch at 7:30 pm on a Thursday.