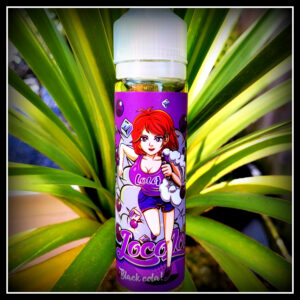 An E-liquid review today from a range released by the popular MoMo Eliquid, this is Lola’s Black Cola by Loco Lola. The Lola range is a small line of E-liquids which are all soda-based juices. This bottle was supplied by the folks over at MoMo Eliquid, who are based in the UK. They have a website where you can buy all their ranges at great prices, as well as apparel and merchandise bearing the brand.

Lola’s Black Cola comes in a clear 60ml Chubby Gorilla short fill bottle with 50ml of E-liquid. Obviously, this leaves the 10ml space for a Nicotine shot, which is added by popping the cap. A bright purple label wraps the bottle with the front featuring a big graphic of Red-headed, top-heavy Lola, above the title and flavour.

Labelling and design are very appealing with unique graphics.

The flavour profile of Black Cola by Loco Lola is described on the MoMo website as; Lola’s twist on her signature cola, a refreshing blend of blackcurrant and blackberry carbonated with a splash of cola. Served iced. On having a smell from the bottle, I get a dark berry scent with some Cola alongside. I must admit it does smell very soda-like.

On the vape, Lola’s Black Cola hits you first with a very deep and fruity Blackcurrant, sitting with a Blueberry that adds the sweetness. A little into the inhale and a Cola flavour pops in alongside in the middle of some icy coolness. More of this comes out within the exhale and there seems to be an element of a fizziness on the taste. The after-taste leaves you with a nice Blackcurrent flavour (which in fact tastes quite like Ribena) with some Cola and coolness which lingers on the tongue.

Lola did a cracking job with this flavour! It’s a very refreshing summertime flavour and without being the biggest fan of Blackcurrant, I really liked this mix. MoMo got the blend just right with not over-doing the Cola flavouring which can get quite sickly when you vape it too much. The Cola in this is just right and compliments the dark berries. The coolness again isn’t over-done and marries the flavours together while adding some fizziness to the taste.

You can pick up Lola’s Black Cola by Loco Lola on the MoMo website linked above. A bottle of 50ml is just £10 direct from them. You’ll also find it online at many vape stores, as its a very popular and reputable brand. Thanks for reading!