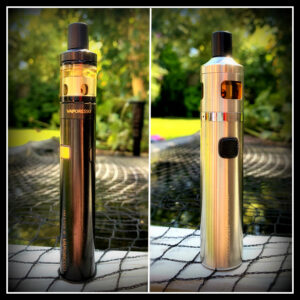 Here with a first! Vaporesso vs…. Vaporesso! A double review with gloves off and punches thrown. Both devices have the same form format, but with different aims. Similar devices, so we’ll match them in this fight. 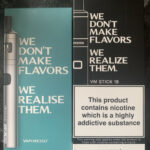 Small sticks have become popular again, fighting all the pod kits for some of the market share while keeping a fairly pocket-friendly size. These are full-fat starter kits in the true sense of the words, but can also be kept in a handbag as a night out device, or a shirt pocket as a go-to.

So, let’s dig a little deeper into these two devices. 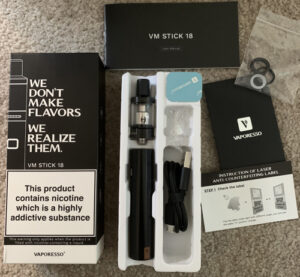 The VM Stick 18 is an 18mm diameter stick device, standing in at 124mm from toe to tip (excuse the pun), with a 1200mAh battery that quick charges in an hour using a 1A charger. With the usual selection of colours, I had the black version to review. The paint job was hard-wearing and stood up well to bumps, hits, and scrapes.

The packaging presents itself for what it is: a basic, steadfast device for beginners. No glitz. No glamour. Just the device. Coming in a black & white box, which includes 2 coils, a micro USB cable, spare o rings, glass, and of course the device. The glass is a nice addition, as the device isn’t an AIO with a protected glass tube, so could possibly break. The coils included a Meshed coil and a CCELL coil. The device has a 510 connector, which also means the whole tank could be replaced in the future if necessary.

In the other corner… 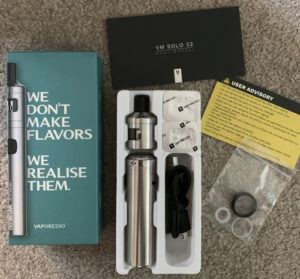 The VM Solo 22 is a 22mm diameter stick device, standing in at 114mm from toe to tip (excuse the pun… again), with a beefy fat 2000mAh battery that quick charges in 90 minutes via 1A charging. What it lacks in the 10mm height, it most certainly makes up in weight. Having the silver, with a nice brushed steel finish, there was no paint to worry about, and rough treatment ended up with no scratches or scuffs. A resilient finish. Being an AIO system, the glass is protected by the outer steel protection. This gives it significantly better resilience but means that if it dies, it dies (ok, Rocky IV quote there for the movie buffs) and there’s no way of replacing it.

The packaging was another basic box, featuring all the normal information and warnings. Once again, no sparkle or shine (other than the finish of the device). Coming in a teal and silver box, it definitely looks much better than the other box, and includes 2 coils, a Micro USB cable, and the device. The coils included a Meshed coil and a CCELL coil.

Both kits come with everything you need to get the device up and running. (bar the e-liquid of your choice)

Filling both kits was easy – just a case of unscrewing the top cap, and pouring the juice into the tank. Simples.

Deciding to use both devices at the same time, I proceeded to spend 2 weeks solely on these devices. Testing both devices, one thing was very clear – both devices worked best with 50/50 e-liquids. They both lacked speed (well, wicking speed, but let’s be dramatic here) but both had some punching power with the appropriate e-liquid.

While not cloud chuckers, they do what they are supposed to do very well when you use nic salts and 50/50 liquids, and both devices produce a decent enough vape experience. Certainly, both work well enough to keep a new ex-smoker off the cigarettes. The draw on both was quite airy, with the M18 having an easy to adjust airflow.

After 2 weeks of almost chain vaping, the coils on both held up well, with no burning or other nasty tastes coming from the coils. the coils provided a clean flavour experience. Both devices also have replaceable 510 drip tips. (this is important, as you’ll see)

While it probably not bother a new vaper that much, I found the drip tips got quite warm very quickly – It would be the first thing I’d be replacing. It’s a shame that there weren’t other optional shaped drip tips in the boxes to switch to.

The other negative side I experienced from these devices was the lack of flavour from certain liquids. I found that where the coils worked brilliantly with fruity and menthol 50/50 salts, the flavour using dessert juices was, to say the least, lacking. As long as you use fruity or cool e-liquids, you’ll be happy with them.

Ok, so this leads us to the conclusion. Who wins the fight? Does it go the distance with these?
We do have a winner. The fight didn’t go the distance, as one of these slim lightweight combatants had a significant issue. 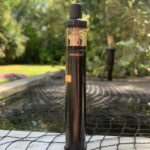 The winner was the VM Stick 18, with the VM Solo 22 having some unforgivable leaking issues. The VM Stick 18 did a sterling job and had no problem with leaking.

Pricing for these devices ceases to be a factor but proves that you can get a decent starter kit stick without paying a premium. (The VM Stick 18 has an RRP of $27 and the VM Solo 22 an RRP of $31)

So, given the choice between these, I would definitely pick the VM Stick 18. A smaller device, with a decent flavour, spares in the box, adjustable airflow, and no annoying leaking issues. All at a lower price than it’s alternative (with an option of replacing it in the future should you drop it and destroy the tank). It’s ideal for someone who’s moved over from, for example, menthols, and is a serious competitor for the well-known stalwart, the Innokin T18. 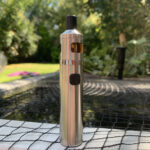 With the £4 you save, invest it and grab a longer comfortable drip tip.

While not being a clear champion, the VM Stick 18 is definitely in the running as a worthy competitor for all the other sticks that are out there.

You can buy each device at the Vaporesso web store for either the VM Stick 18 or the VM Solo 22.

This review was by long-time vaper and vape show host; Chunkmeister. You can find his website at chunkmeister.com and catch his live shows on his Youtube channel on most Wednesday nights at 10 pm.