Another hardware review today and this is the currently very popular Pod Mod, the Drag S by Voopoo. This little device along with it’s bigger brother the Drag X has been a hit with sales in the vaping scene. The Drag X is pretty much the same device but the main difference is that it takes a single 18650 battery, whereas this slightly smaller Drag S has a built-in internal battery.

This was supplied by the folks over at E-Cigarette Direct who have a nice user-friendly web store, stocked with top brand vaping hardware and E-liquids at great prices. You can pick up free UK delivery on all orders over £15 and shipping time is super fast.

So let’s dive into this Drag S by Voopoo and find out if the hype is worth it! Voopoo has fast become one of my favourite brands due to my use of the Vinci and Drag 2 so I was hoping this would hit those heights.

The Packaging and what’s in the box? 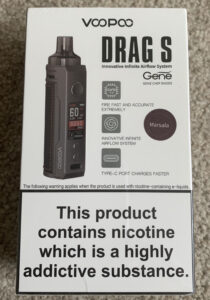 Voopoo’s Drag S comes in a cardboard box with an outer sleeve. The front of the box includes the printed device picture, title and key features. A printed nicotine warning appears on the bottom. The colour of the device (well, the back leather part) is labelled on the front too. This Drag S is in ‘Marsala’ which is red.

One side of the box includes printed social media info for Voopootech and the other side has the printed Technical support QR code. The reverse of the box has printed box contents, warnings, Voopoo’s contact info and large printed Nicotine warning across the bottom. A bar-code and the scratch-for-authenticity label also appears on the back.

Inside the box contains the Drag S device, a little user manual book, PnP empty pod of 2ml, a Type-C USB charge cable and a little card explaining the device modes. There is also supplied 2 x PnP coils. One is rated at 0.3 ohms resistance and the other is 0.2, so both coils included are for sub-ohm direct-to-lung vaping. 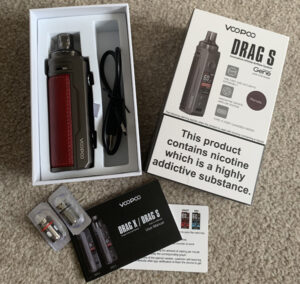 Voopoo’s Drag S is a small AIO Pod device with a built-in internal battery. The device measures in at 8.7cm height with the pod, 2.8cm width with a 3.3cm depth. On the front of the Drag S is a large coloured display screen below the main power/fire button. Below the display is the up and down buttons which sit above the mini USB-C charging port. This is all situated on a tough alloy body.

On the reverse of the Drag S and wrapping to each side is a slightly padded Leather texture in the colour of choice. This has stitching around the panel with ‘Drag’ imposed in the Leather, down the centre. Above the panel on the back of the device and sitting at the top, is an airflow control, which is pushed either way to open and close air slots on each side. The top of the device has a sunken part to click in the pod which is held in magnetically. 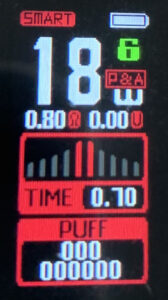 The Drag S has a 2500mAh internal battery and runs with Voopoo’s latest Gene.TT chip. To power on or off the device, it is the usual fast 5 clicks of the button. It can fire from between 5 to 60W and Voopoo boast fast ramp up time. It can fire an ohm resistance of 0.1 to 3.0 ohms (which makes it also handy for the after-market 510 adaptor and RTA pod). Fast clicking the power/fire button 3 times changes each mode from Smart to RBA mode. This is clear via the colour change on the display screen. Voopoo’s Gene.TT chip is automatic by seeing the resistance of the coil and setting accordingly in smart mode. It also remembers the last setting so you don’t have to keep changing the wattage after charging and also sets the best wattage for the coil resistance used on the device.

There are multiple safety settings on the unit including overcharge protection and max power protection, which will avoid burning out coils by setting too high when in RBA mode.

The Drag S (and X) run with Voopoo’s PnP pods which utilise Voopoo’s whole PnP coil range. It is refillable via a rubber bung on the bottom and you add the coil by simply pushing up through the middle. The bottom of the pod has a few magnetic plates which simply drop-in and connect into the Drag S and away you go!

The pod is made of tough plastic with a smoked appearance. The E-liquid capacity is 4.5ml and 2ml for TPD governed countries in Europe. There are two coils supplied in the box to get you started. Both are low rated 0.3 and 0.2 ohms. The PnP coils bought separately come in a large range of different resistance, so there is plenty to choose from to suit your vaping preference.

I’ve been using the Drag S for over a month now every single day. It’s comfortable in the hand and easy to vape on and refill. The settings are user friendly and it just works perfectly. It’s referred to a lot as a Pod kit, but it’s basically an AIO and pushes aside some use of larger regulated box mods and tanks.

The PnP coils last quite well having a supply already from my Vinci device. Using both the 0.3 and 0.2 over the weeks, for me, there doesn’t really seem much difference, though I do get slightly more flavour from the 0.3. Cloud production is brilliant and packs such a punch for a little device. Refilling the pods is super easy and quick to do without any mess.

After a week or so of having the Drag S, I liked it so much that I bought a Drag X as well to use alongside. I do sort of prefer the Drag S in the way that it’s a little smaller and the internal battery charges very quick. Although battery life is really good on the Drag S, lasting me a days use, the Drag X might be better in a battery sense with the use of the 18650 supplying a bit more life.

I’ve used Voopoo’s Vinci pretty much all the time since it’s release at the back end of last year. A test for the Drag S is that would it send my Vinci back to its box? It hasn’t and there is a reason. I mostly use my Vinci with the PnP 0.8 coil for MTL and the RBA with similar resistance. I used the same PnP coil in the Drag S and yes, it did give me the same loose MTL draw, but for me, it wasn’t quite the same as the Vinci. It seemed to lack a touch of the flavour compared and think it might be down to the difference in the pod design.

So, the Drag S is very good for DTL and does equally well with a higher ohm coil on a very loose MTL, it just didn’t cut it for me at higher ohm compared to the Vinci. If you don’t own either, then I would say definitely go for the Drag S or X, of course, it’s better. It is more up to date, the pods are more universal releasing on newer Voopoo products and just feels an all-round a better device.

You can pick up Voopoo’s Drag S at E-Cigarette Direct, currently at £27.99 (the Drag X is currently the same price) via the links at the start of the review. There are many options in the leather colour, including some new ones just released. Thanks for reading!