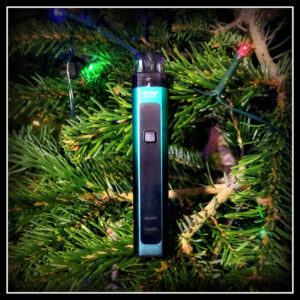 Another pod stick today and something new, this is the Nexmini by OFRF. This is OFRF’s entry into pod sticks following the Smok & OFRF nexMeshPod kit release. OFRF is the side-by-side company of vape giants Wotofo, so we know it should be quality vape gear. Wotofo has, year after year, brought us brilliant vaping hardware, more renown for tanks and RDA’s.

Let’s dive in and see what the Nexmini offers!

The Packaging and What’s in the box? 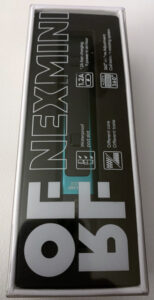 Inside the box includes the main Nexmini device in packing on top. Underneath includes the accessories. This is the user manual, USB Type-C charge cable, and a spare coil.

The box and packaging are basic but includes everything you need inside. The spare coil is a plus to include, so you can try out what coil you prefer before buying replacements. 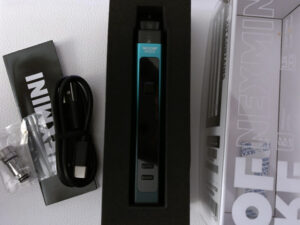 OFRF’s Nexmini device is an MTL pod stick with a built-in 800mAh Lithium-ion battery. The device is small measuring just over 11cms height and just over 1.9cms width and depth. 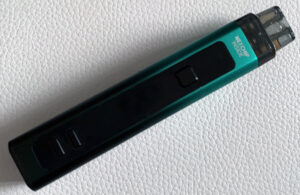 On the front of the device is printed ‘Nexchip Inside’ at the top, above a dark panel that has the fire button at the top, the screen in the middle, and the up and down buttons near the bottom. The reverse of the device has a grilled type pattern with ‘#NEXMINI’ etched on top. The left side of the Nexmini has an airflow hole near the top, with an etched-in ‘OFRF’ and ‘.com’ printed at the bottom. The right side has another airflow hole with a printed mesh graphic at the bottom with the text ‘Powered by NexM Technology. On the very bottom of the device is the USB-C charge port and the pod simply pushes in at the top of the unit.

To power on the Nexmini is the usual 5 fast clicks of the power/fire button. You are then greeted with an ‘OFRF’ text and the version number on the screen. The display is a 0.69″ bright OLED screen and contains all the info you need. The current power in wattage is in a larger font in the middle, which changes to puff time when firing. To the right is the current battery level above the voltage. On the left is a puff counter on top, with coil resistance underneath. There is no automatic draw function so you can only fire the device via the button.

The wattage power is simply set by the up/down buttons and can power from 1 to 30 Watts. To reset the puff counter, it’s simply a case of holding the fire button and pressing the up button simultaneously. A full charge is listed at 50 minutes and pass-through charging is supported.

OFRF’s Nexmini currently comes in a selection of colour options. The one shown here is in Black/Green, but you can also buy it in; Black, Silver, Mocha Gold, Gold, Black/Red, and Black/Blue.

The Nexmini pods come in 2.5ml juice capacity, or 2ml in TPD governed countries in the EU. The coil simply pushes up through the bottom and fits into place. On the side of the pod is a silicone rubber bung that pulls out to refill the pod with E-liquid. The bottom of the pod has a waterproof connection to eliminate any problem with condensation to the connection.

Two coils are supplied in the kit. There is a pre-installed M22 nexMesh 0.6 ohms coil which is A1 Mesh. The other is M21 Parallel 0.6 ohms coil that is A1 Wire. Both coils are primarily mouth to lung and include an airflow adjustment on the bottom for the option of a tighter or more open draw.

I’ve been using the OFRF Nexmini for over a week now and am very impressed with it, in fact, it is my new favourite pod stick. Being mostly a mouth to lung vaper these days, this device gives me an exceptional MTL vape. I think the main reason is the use of really good replaceable coils. The pod is thin but deep, and that gives enough room to use coils of this size, with a device so small.

I was lucky enough to be sent some replacement coils and a spare pod so I used each different coil in a pod and alternated between. Although I found the M22 NexMesh coil to give slightly better flavour, the M21 Wire Parallel was still a really good vape. In a week, both coil’s are still going strong without any drop in flavour. Different flavour profiles all give cracking flavour on either coil used.

The Nexmini device packs a punch despite its really slim profile. There is not an automatic draw feature so it’s a manual fire. The fire button is really responsive and gives a consistent vape with every draw. I found on using both coils, you really don’t need to go as high as the recommended wattage. They really do a good job at lower wattage but obviously, that’s up to how you want to vape.

I currently have Sticky Strawberry Cake E-liquid by Gloop running in the Nexmini, the Geekvape Aegis Boost Plus and Voopoo’s Drag S, all with similar resistance coils. The Nexmini for flavour (and to an extent, cloud production on MTL) blows the other two out of the park! The coils running with the Nexmini are some of the best stock coils I have found for flavour.

Following that pretty big statement, do I find any cons with the Nexmini device? If we want to be really fussy, the juice levels in the pod can be a bit deceiving. As the pod is deep sitting in the device, when you vape, it looks like you are running low on E-liquid. Removing the pod to check, shows at least another 50% which is obscured while in the Nexmini. It isn’t really a flaw, and more by design to get the unit so small. Also, the printed ‘.com’ looks a bit out of place on the side after the etched ‘OFRF’, but that’s probably getting too fussy on a device, which is really impressive and packs a punch for its size.

Charging is fast in under an hour for a full charge, and you can always grab it for a vape while charging with the passthrough function.

I made myself a rule to not score hardware and leave that for E-liquid reviews, but if I was pushed to, it’s a clear 9.5/10 as a pod device. Small, thin, easy to put in a pocket, user friendly and gives a superb mouth to lung vape full of flavour! A smoker looking to kick the cigs or a vaper wanting something easy to carry around, you will definitely not go wrong with this! Superb little pod stick!

As of publishing this review today, I believe shops are starting to receive stock of these. You can easily search VapeView to get a list of vape stores with current stock and prices.