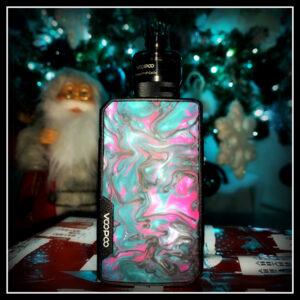 A hardware review today with a trusty device that’s been repackaged with a newer tank, this is the Drag 2 Refresh Edition by Voopoo. Every seasoned vaper will know the Drag 2 mod, due to its popularity over the last few years and it’s now carrying the popular PnP tank in the kit. We’re going to have a look through that kit today and see what it’s about.

This was supplied by the folks over at New Vaping who have a big web-store full of top brand vaping hardware, E-liquids, and accessories. I’ve placed quite a few orders there over the last year or so, and they have really good prices and delivery within a few days. You’ll also find some good vape deals and sales going on over there, so if you haven’t already, go check them out.

Let’s dip into this Drag 2 Refresh Edition and see how it is.

The Packaging and What’s in the Box 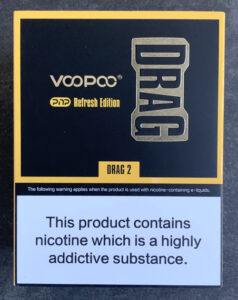 Voopoo’s Drag 2 Refresh Edition kit comes in a cardboard box with an outer sleeve. The sleeve has the printed title and Voopoo branding above the large printed Nicotine warning on the top. One side of the sleeve includes a printed QR code and the other side includes printed social media info for Voopoo. On the bottom of the outer sleeve includes printed box contents, warnings, Voopoo’s contact info, a scratch-for-authenticity panel, and the bar-code.

The sleeve slides off and reveals a Voopoo branded thick Black cardboard box. Inside the box, at the top in felt padding is the main Drag 2 box mod. That lifts off to the accessories underneath, again in felt padding. This includes the PnP pod tank, USB cable, and two coils for the tank. One of the coils is Voopoo’s PnP-VM6 rated at 0.15 ohms and the other is the PnP-VM5 rated at 0.2 ohms. There is also a printed user manual in amongst the accessories. 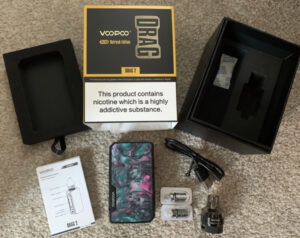 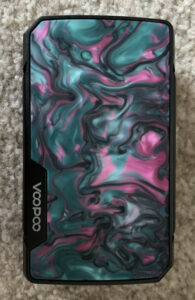 The Drag 2 mod runs with 2 x 18650 Batteries and fires a maximum of 177watts. The mod is a good size of 8.8cms height, 5.1cms width, and a depth of 2.6cms. The front of the device has the usual Drag resin panel with the chassis of the device in Black Zinc Alloy. The back of the device, which is the removable magnetic battery door has the printed large ‘Drag’ title. Down one side of the device is the main power/fire button above the OLED display. Below is the up/down buttons above the mini USB port. The bottom of the Drag 2 has some vent holes and a printed ‘Designed by Voopoo in California Made in China’. At the top of the device is the 510 port.

Voopoo’s Drag 2 is powered by their GENE FIT chip with an output wattage range of 5-177W. Its resistance range in power mode is from 0.05-3ohms and while in temperature control mode it is 0.05-1ohms. The chip also supports Ni-200, Titanium, and Stainless Steel so handles Temperature control (for whoever actually uses it). There are also multiple safety protections running on the mod including overcharge and short circuit protection.

To power on the Drag 2, it is the usual 5 fast clicks of the power/fire button. The same to power off the device. The modes can be switched by 3 fast clicks when the device is powered up. The modes are Smart mode, RBA mode, Temp control, FIT mode, and custom mode. You’ll know where you are with the modes as it is indicated on the display screen.

The display screen has a large font for the current power including the mode on the right. To the left are the battery indicators (for each battery), current resistance, voltage, and last puff time.

You can lock the Drag 2 by pressing the fire button and up/+ simultaneously or flip the display screen orientation by holding fire and the down/- button. The display will enter sleep mode if idle for 30 seconds and pressing a button will wake it up. It is listed in the manual that you can charge via USB but it’s always best to charge 18650’s via a separate proper Battery charger for safety reasons.

The kit comes in various colours. This is only applied to the resin panel on the Drag 2 device. The colour featured here is Aurora, but there is also Dawn, Puzzle, Scarlet, and Ink available at New Vaping. The refresh edition kit can also be bought in a ‘Drag Mini’ option. 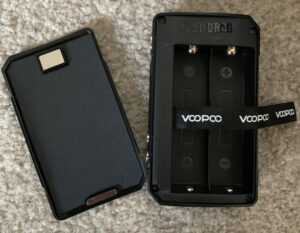 As part of the Voopoo Drag 2 Refresh Edition kit is the PnP Pod tank. I think this tank is what spurned the re-release of the Drag 2 kit, as the pods that were originally made for Voopoo’s smaller pod kits can now run via a 510 connector.

The E-liquid capacity of the pod is 2ml for TPD governed countries within the EU and a larger 4.5ml pod everywhere else. The pod simply pulls out from the 510 adaptor which is held magnetically. You fit the coil by pushing it up into the middle of the main part of the pod. E-liquid is filled by pulling out the rubber bung at the bottom of the pod.

Two coils are supplied in the kit both from the PnP VM range. One of 0.2 ohms resistance and the other of 0.15 ohms. You can choose to use something of higher resistance by buying any of the PnP coil range as they will fit this pod.

The Adapt 510 connector has a knurling surround and a large Airflow slot on each slide, that can be adjusted by simply turning to open and close to your preferred way of vaping.

I think Voopoo has done a great job bringing back the Drag 2 which has been a very popular device and pairing it with the PnP coil series with the adaptor. In a stifled market of pod kits, this bridges the gap of using a faithful sturdy box mod along with a pod on the top.

I’ve been a big fan of Voopoo since the original Drag release. The Drag 2 is nice in design and comfortable in use and the trusty GENE chip works well. Its functions are basic and user friendly but still has all that you need for most vaping styles. If I was cornered on any cons, it would be that resin panels on both sides would look better and I get very, very slight rattle from the battery door, but it is really minor. The batteries last well when using the Drag 2 for long periods but obviously depends on your wattage in use.

The pod tank is impressive. It’s brilliant how Voopoo took the original tank for the Drag S and X and created the adaptor to run on any 510 mod. For someone that uses the Voopoo Drag pod systems, this has the added bonus of simply taking the pod from that and dropping it into the adaptor, and using it on the Drag 2 (or any mod with a 510).

The PnP coils do offer good flavour and longevity. Although I mostly opt for mouth to lung resistance, I found both coils supplied in the kit do give a brilliant vape. I find these lower resistance coils do give slightly better flavour and obviously pack more of a punch in cloud production.

If you’ve only been using pod devices and looking to move to something else a bit beefier, then this kit is a must-buy. The Drag 2 is a tried and tested device that’s been around a while now, paired with the Adapt PnP coil option, you can’t go wrong. 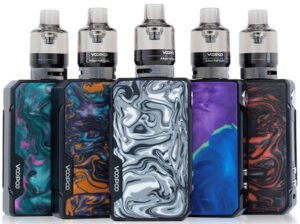 You can buy the Voopoo Drag 2 Refresh Edition kit at New Vaping via the links at the start of the review. Also, look out for their Christmas sale starting on the 21st, where you can grab some good vaping deals.