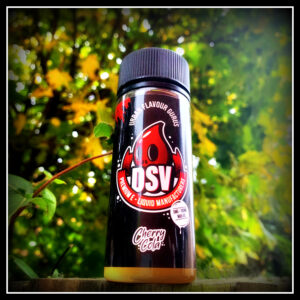 Another E-liquid today and another from the Darkstar stables; this is Cherry Cola by DSV (Darkstar Vapour). Darkstar is a popular online store selling an array of E-liquids and vape DIY supplies. They sell many of their own flavour ranges which come in shortfill’s, one-shots and Bottle Shots®. You can also pick up a large range of flavourings, VG, PG and base mix over there.

This flavour is meant to be one of the more popular ones at Darkstar so let’s check it out!

Cherry Cola by DSV comes in a 120ml clear Chubby Gorilla bottle with 100ml of E-liquid. There is space to add a few Nicotine shots if you wish. Two 18mg Nicotine shots will make it a 3mg Nicotine volume. You can also purchase this flavour in a One-Shot bottle or Bottle Shot®.

A Black with Red label wraps the bottle. Printed on the front at the top is ‘Urban Favlour Gurus’ above the main graphic of a Cherry drip character. Off to the side of the graphic is the printed juice ratio of ‘0mg, 100ml and Max VG’, this is above the flavour title. Over to the left of the label is printed contact info of Darkstar above printed E-liquid warnings. On the right of the label is the printed flavour profile, Darkstar info and bar-code. On the bottom of the bottle is a label showing the batch number and best-before of the E-liquid.

A clean and appealing label with all the info you need on an E-liquid bottle.

While it isn’t Rocket Science to know what flavour this is, it is described on the Darkstar website as; Full-bodied, packed full of flavour and refreshingly sweet. This bold and authentic cherry cola flavour is the taste of nostalgia you’re looking for. On having a smell from the bottle, it is a deep Cherry with a sweet Cola scent. The liquid itself is quite dark and has some cloudiness which will be down to the concentrates used.

The juice is listed as ‘High VG’ so I’m guessing it’s a 70VG minimum ratio. With the flavours of this mix, it won’t need a long steep, so if you are adding Nicotine shots, shake it and leave it for a day. So let’s see how it tastes!

On the vape, Cherry Cola by DSV is a nice blend of sweet Cherry alongside a Cola flavour. The vape is smooth and the flavour stays consistent throughout the vape. The Cola flavour to me is more of a candied Cola Bottles taste and can even taste more of that sweet gummy flavour on the lingering aftertaste. The Cherry is also a nice sweet flavour that is blended really well with the Cola. There also seems to be something sitting with the Cherry, like another fruit to maybe enhance the flavour more.

Although it is a sweet flavour, it isn’t in any way overdone and can easily vape this all day without it being sickly. A few Cola E-liquids I’ve had before seem to annihilate it with Cola concentrate, which almost becomes too thick on the vape, this one is perfect and really well balanced. I can see why this is popular!

No cooling in this but would work well with a Koolada Shot or two if that’s your thing.

My Score: 8.8/10 – A flavourful vape of Cherry Cola Bottles which I cannot stop vaping!

To pick up Cherry Cola by DSV, head over to Darkstar via the links within the review. A 0mg 100ml shortfill bottle of this is currently just £7.95 which is an amazing price for a juice full of flavour and well mixed. Thanks for reading!