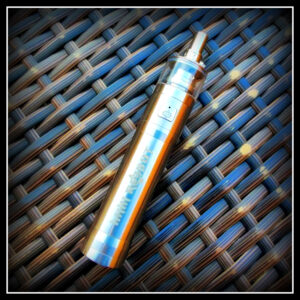 Good day, vape fam! I am indeed back for another hardware review, with the Steamcrave Mini Robot Combo MTL Kit, which was sent to me for the purposes of a review from Sourcemore.com (much love, Joyi!).

In case you are not yet familiar with Sourcemore, they are one of the biggest vape retailers based out of China. They sell pretty much everything you could ever need for vaping, and they run crazy sales from time to time. In one of these crazy sales, for example, I got an MTL RTA for less than £8 delivered, which was extra value for me as the RTA in question is one of the best for MTL I have ever used!

But, back to the kit we are here to discuss: the Steamcrave Mini Robot Combo MTL Kit!

Steamcrave is known in the industry for going big on their mods and atomisers (35 mm Ragnar RDTA, anyone?), and because of that, is quite well known by DTL vapers. Although they have dipped into the MTL market before with the release of the Aromamiser Lite RTA, for example, the Mini Robot marks Steamcrave’s newest attempt to attract MTL vapers to their brand.
Now, that’s all well and good, but where will the Mini Robot sit in the ever-growing army of MTL devices? Who is this kit really for?

We’ll answer these questions as we go through this review!

As always, my review will be from my own personal experience as an average vaper, as most of you reading will be.

I was sent the retail version of the Steamcrave Mini Robot Kit, which includes a whole heck of a lot: 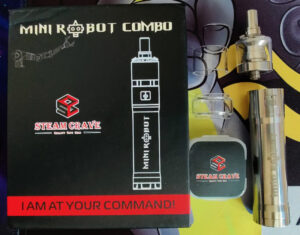 The box containing the kit is nice and simple enough, with branding and product illustration. The tag line for the product “I am at your command” is printed on the front. The lid of the box is magnetised for opening and closing the box, which was a nice touch. However, the info I’d usually expect to find printed on the back like kit contents, features, and company socials are missing.

I think Steamcrave could have used the real estate on the back of the box for this type of information, and doing so would have made the packaging even better. One other thing to mention is that for some reason, Steamcrave did not include any cotton with the coils included in the kit. I’m not sure why this is but I would hope that future kits can include at least enough cotton to wick both the coils provided.

Salient Features of the tank and mod include: 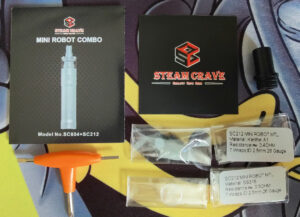 The whole kit is quite petite and light considering that it’s all stainless steel. It does sort of resemble a mech mod given its form factor, but with the output adjustability and protections, it certainly is not a mech. It looks solid and both main parts come together well. Speaking of the main parts: 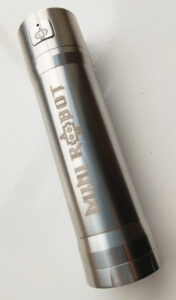 This mod looks simple and unassuming, but it is made in a clever way.

The mod dissembles into 3 main sections: the battery cover with vent holes, mod body/barrel, and the top portion. The top portion has the chip, 510 connection (which doesn’t seem to be spring-loaded), and fire button with the LED indicator light. The barrel mainly houses the cell and has a big “Mini Robot” CNC-engraved branding on it, which in my opinion could have been printed on the mod in a more subtle way. Lastly, the battery cover threads into the barrel and has an adjustable knob to keep any 18650 cell snug inside the mod without any rattle (don’t overtighten it, though). I thought this was a nice touch and adds to the solid feel of the mod. The cover also bears the mark for negative battery orientation so that you will always know how to insert your cell.

Something to bear in mind: the mod doesn’t have a USB port, and so the battery would need to be charged externally.

Mod operation is as simple as: 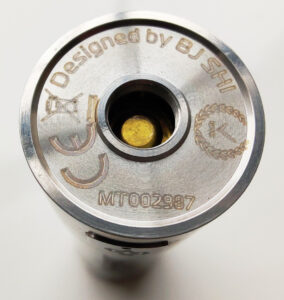 In my use of this kit, I find myself being perfectly happy in the low and medium voltage settings. Max power was too high for the builds I used; in this setting, there seems to be too much power going into the coil. I took my first few puffs in the max power setting and was getting dry hits, hence I have used the mod mostly in the lower voltage settings. My disclaimer though is that I used simple round wire builds, but I would imagine that with a fused Clapton (for example), the max setting could be useful as it takes a little more power for such a coil to heat up.

Overall though, I was pleasantly surprised by the mod and how well it performs! It fires quickly and I could feel the difference between each power level. It can fit 23 mm atomisers and below, and so can be compatible with a whole host of MTL tanks in the market.

The RTA comes with a metal 510 drip tip by default. Seeing this, I assumed that this would get hot on my lips over time and I’d need to switch to the Delrin spare, but surprisingly it hasn’t really, which is a positive!

To fill the tank, you’d have to unscrew the top ring where the drip tip is inserted which will then reveal 4 fill holes. The fill holes are large enough for the 10 mL bottles sold in the U.K. and some shortfill bottles, but I don’t think those with chubby tips would fit comfortably. Saying that, refilling was easy enough, but the only thing to be mindful of is the airflow pins which may get in the way because of where they are positioned. 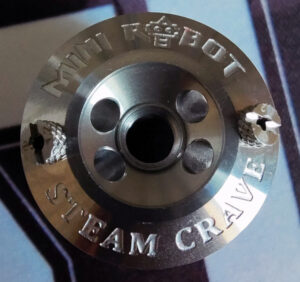 Speaking of the airflow pins, I do love that Steamcrave provided a lot of options to allow the vaper to customise their draw. I used the 1.2 mm most of the time because this is the level of MTL draw I like, but some people might prefer a looser or tighter draw, in which case the other included airflow pins will come in handy. They can be easily changed whilst using the RTA, even using one’s fingers to screw and unscrew, and can be tightened further with a flathead screwdriver if desired.

The build deck is quite simple and was easy enough to build on. It even has a bridge for a coil rod! There are two posts at either end where the leads will be tucked into. Just slot the leads in, screw them down, trim flush, and then you’re all set to pulse and wick!

I’d strongly recommend using a coil rod to make the building process even easier, as it helps to position the coil at exactly where it needs to be. I’d also recommend using a maximum of 2.5 mm inner diameter coils for this build deck as it’s not that big. 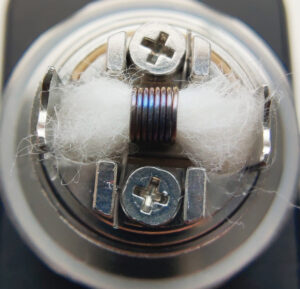 For wicking, I did have to try a couple of times to get the wicking right- after all, each RTA has its own way of wicking! But what worked well for me is using a lesser amount of cotton from my usual, trimming said cotton just a bit over where the juice slots are, and making sure it’s tucked comfortably (not tightly) into the wicking wells. A tad too long or too thick gave me dry hits after a couple of puffs, and so this is the wicking method I’ve found to work for this RTA.

The RTA gave good flavour overall, considering that it’s a top airflow RTA. Although of course, the flavour quality depends a lot on the build used. The draw was smooth and consistent- the RTA has been a pleasure to use!

I would say that this kit is aimed at the experienced MTL enthusiast/hobbyist, and so would be a Yay for this group of vapers. The RTA is simple enough to build and mod extremely easy to use. The kit is small for what it is, so definitely one to take out and about. It places itself in the crowded MTL market, perhaps for vapers who want something a little more than the typical MTL pod kit.

The Steamcrave Mini Robot Kit has great ergonomics and performs really well for MTL vaping. It is something that I can see myself continuing to use in my daily life.

Once again, my sincerest thanks to Joyi and Sourcemore for sending me this kit for review! Use SCRK at www.sourcemore.com to get this kit at a discounted price! Links at the start of the review.