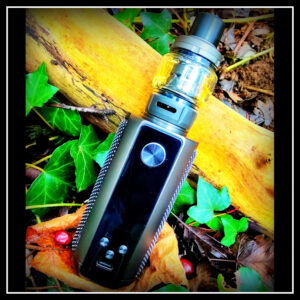 Vaporesso Target 200 Kit – Does It Hit the Mark?

Howdy-doo, vapefam! I have been testing the Vaporesso Target 200 Kit for over a couple of weeks now, and I would be ever so pleased if you can join me in exploring what this kit offers!

This kit was kindly provided by Vaporesso (thanks, Milo!) for the purpose of a review.

Vaporesso has been in the vape industry since 2015 and has since produced some of the best devices seen by the community, and some even pushed the envelope for vape kits at the time. My first experience with Vaporesso is actually the Vaporesso Pod Stick, and this was back when I first switched from smoking to vaping. My first impression of the brand was that they are definitely not like the others I have used at that point in time, with the sleek and vibrant packaging even for a basic starter kit such as the Pod Stick.

Fast forward to a few years later, Vaporesso has proceeded to release very successful device lines such as the Gen series and the Target series. Today, we are going to be looking at the Target 200 kit, which is one of the several new Target devices released of late (Target 80 and Target 100 are the others).

My knowledge may be a little limited, but prior to these recent releases, my understanding of Vaporesso’s Target line is based on the pod kits released under this range: the Target PM30, Target PM80, and Target PM80 SE. And so, I found myself intrigued in that the new “Targets” are box mods instead of pods; and wondering if the Target series is headed away from pods?

As always, I will look at the Target 200 kit as an average vaper, as most of us in the community are. 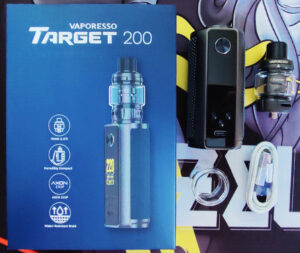 I was sent the Vaporesso Target 200 Kit, in what I assume to be retail packaging, that contained: 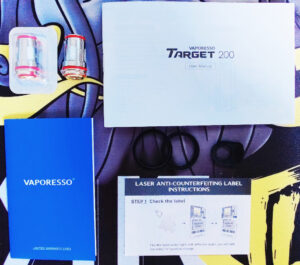 The kit comes inside a black sleeved box that has a photo of the device in front as well as its key features. Around the box, one will find the usual manufacturer information, kit contents, and kit specifications. Presentation-wise, it looks sleek albeit not as stylish as previous Vaporesso packaging I’ve handled in the past.

Inside the box, everything is presented in one tray but in a clean and organised manner. I do like this minimalistic approach to kit packaging as oftentimes, I find that other manufacturers tend to overdo their packaging and not maximise the space inside the box. Subjective kudos to Vaporesso here!

One thing that did annoy me a little bit is that the box lid does not have cut-outs on the sides for convenience.
Thankfully, the lid wasn’t fit so snugly, and I was able to shake the box to loosen the lid.

The kit as a whole though looks magnificent, and very much on-brand with the Vaporesso I know. It’s eye-catching with its shape and proportions, not to mention the unique finish on the mod material. It looks quite classy and certainly adds a little bit (more) of style to the vaper!

A. iTank and GTi Coils

Versus the Gen releases in the past where most had similar tanks, Vaporesso has released its recent Target series devices with the new Vaporesso iTank.

The iTank looks solid and well-made. The machining is impeccable and there are no crunchy threads to be found. It has an elegant design and relatively little branding, with the tank name, brand all aligned to one side where you will also find the arrow indicating where to push for filling the tank. 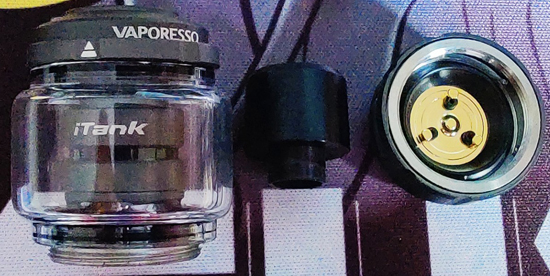 Speaking of, the tank operates as a top-fill, with a lid that you push and slide to the side to expose the fill hole (if that makes sense). The fill hole is generously sized and is covered by a membrane to protect this part of the tank from accidental leaks. 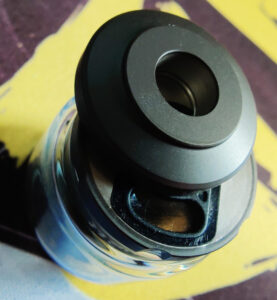 I do wonder why Vaporesso didn’t go for a standard 810 drip tip as even if other 510 drip tips can fit on the iTank, this is definitely not an MTL type of atomiser. But, moving on…

The base unscrews from the rest of the atomiser and has three contact pins for the coil. It also has what seems to be a cupped wall surrounding these contacts, and standing between the contacts and the airflow holes, of which it has three. This “cupped wall” is positioned underneath the coil when the tank is assembled as a whole and seems to help with recycling any liquids from the bottom of the coil. Indeed, I haven’t experienced any significant leaks in using this tank due to this feature, as even though a little amount of e-liquid can collect at the bottom (especially if the tank is left to stand for a day), this feature helps to stop the liquid from seeping out of the airflow holes. Pretty neat, huh? Most bottom airflow sub-ohm tanks will inevitably have a little seepage from the coil, and this wall helps to deal with that. I simply unscrew the base to clean it, and cleaning it is pretty mess-free.

The airflow holes are spaced equally, spin with the perfect amount of resistance, and do provide a generous amount of air to the vape. This tank is quite airy in DTL but cutting the airflow down does work if one wishes for a more restricted vape. I used mine as fully open in the higher wattages, but most of the time, I’ve cut the airflow to around 2/3 of the way. 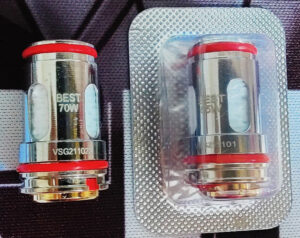 Coils press fit from the bottom, and they do fit quite snugly. I highly recommend using a tool to remove/change coils, but something that won’t scratch the atomiser, of course.

As for the coils, the 0.2-ohm coil (60-75W, best 70W) provided me with a surprisingly flavourful vape (8/10), so much so that I actually think that it can compete very well with the likes of Freemax and Horizontech as far as sub-ohm stock mesh coils are concerned. I could taste the layers of flavour in the e-liquid, and it is quite warm at 65W (my sweet spot) for a mesh coil. It is quite a thirsty coil, but I didn’t mind due to the quality of flavour I was getting!

The 0.4-ohm coil (50-60W, best 55W) gave me a decent vape as well, although I rated the flavour better with the 0.2-ohm coil (7/10 flavour rating). It’s a little less thirsty being run in lower wattages. For both coils, cloud chuckers will be pleased as both can give dense vapour! 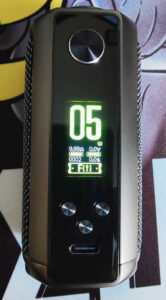 The mod is relatively lightweight even with 2 x 18650 cells inside and has a very sleek design. It is compact and very comfortable to hold, and when grasped, almost naturally conforms to a thumb-fire kind of mod. That’s not to say it’s uncomfortable to fire with the index finger (which is my preference), the mod still is ergonomic however one wishes to press the fire button whilst vaping.

The material (fabric?) that has the water-resistant braiding aids to the pleasant feel of the mod in the hand and makes for pleasant mod aesthetics. It also adds to the grip. All in all, I can’t really complain about the overall design, shape, and finish of the mod- Vaporesso did a brilliant job in engineering this!

Branding is also relatively minimal, with the mod name on the battery door only, and Vaporesso branding classily engraved on a metal strip at the back of the mod. The 510 plate screwed into the top the mod is on a platform- and a tall platform at that! Because of this raised platform, the atomiser size that can be used without overhang is pretty much limited to 25-26mm at most. Anything over that and the combination will have a very obvious overhang. It’s not a major issue for me as most of my attys are within these diameters, but some vapers may use wider atomisers and so I felt that this was worth mentioning. 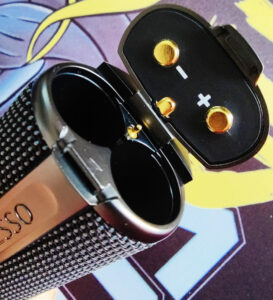 The battery door is at the bottom of the mod and isn’t spring-loaded. It feels sturdy enough to me, and it has clear indicators for battery orientation. It opens and closes via a push-down and slide action.

The front of the mod has buttons for firing, adjustment, mode, as well as the USB-C port. It also has the screen displaying pertinent vaping data depending on the mode selected, including wattage level, puffs, ohm load, and battery levels. The screen is bright and engaging and very easy to see even in the sun- I love it!

Operating the mod has been made easy by Vaporesso: 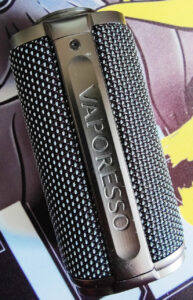 I did wish though that there was a stealth option to the mod as I am a “set it then forget it” kind of vaper, but this is a preference rather than a con.

This mod fires super quick and powerful; there is no discernible lag or warm-up time needed! I did also find that it managed my batteries really well, something that I already noticed with the Axon chip in previous Vaporesso devices. When charging batteries inside the mod (but only do this if absolutely necessary!), the mod displays the time remaining to achieve full charge per battery, which I think is also a great feature to have. So as far as battery management is concerned with this mod, well, you can colour me impressed!

The menu is user friendly to navigate, which seems to be what Vaporesso sought out to achieve with this mod. I don’t really use TC, so the fact that this mod doesn’t offer this feature is not a con to me at all, but it will be for TC users. I found myself using the mod mostly in Pulse mode, largely because I am familiar with this mode from the Gen series, but also because I didn’t really notice any significant improvement inexperience using the Ft mode. Please don’t get me wrong, the Ft mode is good in its own right, but personally, I didn’t find it to be superior to the Pulse mode which I already love. 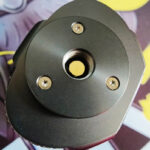 Vaporesso describes the Ft mode as something that “provides a precise heating rate control and the full vaporization of different flavors at different temperatures”. To be completely honest, I am not entirely sure how that translates to how it affects the vape, but it is a new feature that is released with this mod.

The kit has been an absolute delight to use! So much so that I prefer it over the Gen series devices I have from an ergonomics and portability perspective. It looks the business as well! With all of these factors plus its excellent performance as a DTL kit, the Target 200 is a solid Yay for me!

In the course of my testing, I actually found myself picking up this kit rather than my daily RTA-mod combination as the experience I get is quite comparable to the way I vape. I recommend this kit for experienced DTL vapers, and even for vapers who want to dabble with DTL devices as the mod isn’t too complicated to operate.

As good as the mod is (and it is bloody good!), the star of the kit for me has to be the new iTank. I was just blown away by the dense clouds and brilliant flavours I could achieve with it! It’s definitely a tank to keep and use, even on another mod!

So does the Target 200 hit the mark? Oh hells yeah, it absolutely does!

Once again, my biggest thanks to Vaporesso for sending this kit for my review! To pick up the Target 200 kit or find out more, check out the links to Vaporesso at the start of the review.