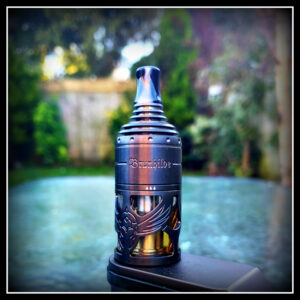 Jumping into 2022 with a tank review that has been around for a while but still is really popular with MTL vapers, this is the Brunhilde MTL RTA by Vapefly & German 103. This was supplied by the folks over at Health Cabin. Over on the Health Cabin website, you will find the best in vaping hardware, disposables and E-liquids. They are based in China but shipping from them is very fast overseas and you can also find some good deals in their weekly sales and clearance items. To see the best prices on their website, make sure you register an account there and log in.

This MTL RTA was released by Vapefly and designed by the German 103 team and I don’t think I’ve ever seen a tank that is so nicely designed as this, so let’s dive into it and see what it’s about.

The Brunhilde MTL RTA comes in an appealing designed box with an outer sleeve. The design is that of old burnt paper with the title and embossed graphic of the tank on the top. The left side of the sleeve has printed contact info for Vapefly and their social media info alongside it. On the right side of the sleeve has the printed tank title and on the bottom has 7 key features of the tank printed, as well as warnings, bar-code and a scratch for authenticity panel.

The sleeve slides off to reveal a Vapefly branded Black box. Inside the box are the contents which are:

The tank is presented well in the box and has everything in to start your build and get it vaping. 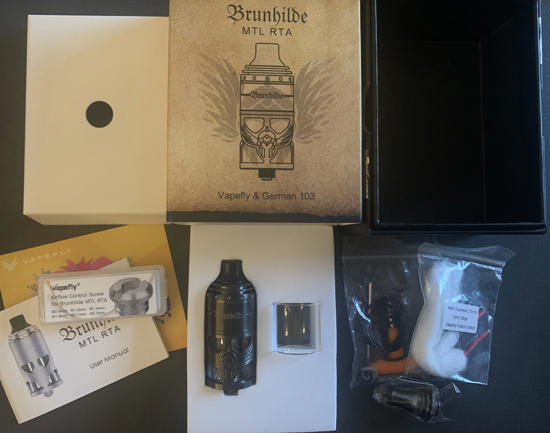 The Brunhilde MTL RTA is a tall tank measuring 6.5cms high with the drip tip. It has a diameter of 23mm. The capacity is 5ml of E-liquid and another version is available with silicone inside for the TPD version bringing the juice capacity down. 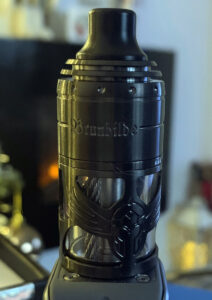 The Brunhilde MTL RTA is a single coil tank with bottom airflow sitting under the deck at the top of the tank. The juice fill is also situated there adjacent to the airflow hole on the deck.

The tank is built with tough stainless steel with a glass tube situated at the bottom surrounded in a frame design. Above the frame and tank glass is the deck with a top cap pushed on the top. Etched-in branding appears around the top cap. 2 holes are adjacent on the top cap, one is for airflow and the other is a juice port that simply turns to reveal and fill. Three printed drips show on the tank body to show the juice port location.

At the top of the top cap above the layered design sits the screw-in drip tip. There is also a narrower spare Resin-styled drip tip in the box, as shown on the feature image.

You can pick up the Brunhilde tank in 5 colours. Gunmetal as this reviewed tank, Black, Stainless Steel, Gold and Dark Blue. 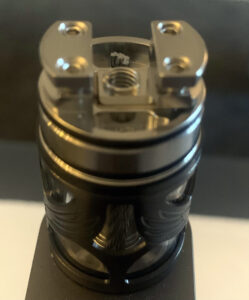 The deck on the Brunhilde MTL tank is a single coil with space for a decent-sized coil. The coil is held on each side by screw clamps with a hole placement under the coil for your selected airflow control screw. There are 6 airflow screws to select from in the box ranging from 0.9mm-2.5mm. One simply screws into the airflow port in the middle of the deck.

On each side of the deck sit a shallow juice well and directly underneath is a hole on each side. Within these holes sits stainless steel wires which sit snugly into the length of the main tank glass. These transfer E-liquid up to the coil and provide gravity-fed wicking. There are another two of these stainless steel rope wires as spares in the accessories. Also supplied are two MTL coils and a few Vapefly Firebolt Cotton laces to get you started.

The Brunhilde MTL RTA comes apart easily for cleaning. All you need to do is remove the 510 pin at the bottom, and all the tank pieces simply come apart separately.

Being a predominantly MTL vaper, the Brunhilde MTL Tank was always on my radar and after using it for 3 weeks, I am not disappointed by it. The tank design is absolutely amazing cosmetically. Sure, it’s a big old size and probably a tank to use more indoors than out and about, but I don’t think I’ve seen a tank for a while that looks this good. German 103 are renowned for this sort of high-quality design and it just looks so premium with its high level of detail.

The build was very easy to do and everything is supplied in the box. You need a steady hand to get the airflow screw installed but other than that, it wasn’t too fiddly at all having a nice amount of space on the deck. I originally thought that maybe those stainless wires would be something you would need to replace often, but after using the tank, I don’t think that is the case. They are thick rope strands and I’d say they would only need changing if using a strong Menthol juice which you change and possibly still leaving some tasting residue, or if you drop any down the sink during cleaning. Like the tank itself, those stainless wires seem built to last. Even so, there are 2 spares in the box and you can buy these separately too if you need replacements.

The vape from the Brunhilde MTL RTA is superb! Those Stainless Steel wires make a big difference to the wicking, drawing up the E-liquid to the Cotton as you vape. In the whole time of using the Brunhilde tank, I have had zero dry hits, not one! The airflow is great using an airflow sized screw to suit your desired vaping and leaving the airflow hole open on the top cap, it does as it should giving a smooth cloudy MTL vape. The flavour is also amazing giving an RDA-type rich flavour on the draw.

If I was to be cornered on any flaws, there is a minor one and that is the juice fill port. A hole is situated on the top cap lining up the open hole with the main tank body under the deck. Both of these holes are quite small. A 60ml Chubby Gorilla bottle just fits depending on the bottle nozzle attached, along with obviously the 10ml sized bottles. At the moment, I am vaping a lot of Darkstar Liquids that are in 120ml shortfill bottles. These nozzles do not fit into the juice fill port, so am having to decant into a 10ml bottle and fill that way. Not an issue at all for most that don’t vape these sized bottles but it is something to bear in mind if you do.

The Brunhilde MTL RTA is a joy to use and now sits as one of my favourite MTL RTA’s and can see why it still remains one of the best and a constant choice for MTL vapers. If you still haven’t got hold of one of these and enjoy MTL vaping, I would definitely recommend it. Maybe not for starters, but definitely for those that are confident adding a coil and wick.

To purchase the Brunhilde MTL RTA by Vapefly and German 103, check out the links to Health Cabin at the start of the review and make sure you register an account or log in to get the best price. Thanks for reading and wish you a safe, happy and healthy 2022!