Hello, vape fam! It may seem like we have been reviewing loads from Wotofo recently. But it’s for good reason as they have released a number of new devices of late. Today though, we will be looking at the Wotofo Recurve V2 RDA, as a follow-up to their very popular Recurve (V1) release from a few years back.

This RDA was sent to me in gold, and for review purposes by the kind folks at Wotofo (thanks, Cara!).

The Recurve RDA is a memorable RDA owing to its unique shape that narrows in the middle. It was created by Wotofo in collaboration with vape YouTube reviewer, Mike Vapes. It was a very successful fruit of their labour, as a lot of people still use it to this day due to its performance and flavour, most of all.

Now, 2022 comes along and with it, is an update to the version 1 Recurve. Personally, I don’t have the Recurve V1 to perform a side-by-side comparison. But from what I can understand, there are quite a number of things that have been changed in this new version 2 of the Recurve, and most of these changes are found in the build deck.

As always, my review will be from my own personal experience as an average vaper, as most of you reading will be.

The kit packaging of the Wotofo Recurve V2 RDA that was sent to me included:

As you may have noticed, the RDA comes brimming with extras which is already a huge pro! Off the bat, you can already run the RDA however you like and without needing to buy anything else. My only comment with it (and this is not a con by any stretch of the imagination) is that there is no coil guide included. However, if you have been building your own coils and rebuildable atomisers, you will most likely have your own coil guide anyway (e.g., the Coily tool).

The box is styled in Wotofo’s usual green and black theme. An outer sleeve houses an inner box that contains everything in the kit. An illustration of the RDA, list of kit contents, manufacturer information, and warnings can be found on this outer sleeve. Sliding it off, the RDA can be found resting on a foam tray, underneath which you will be able to find all the coils, cotton, tools, and spares as listed above. The baggie containing the coils list information about each coil type, including the recommended wattage for operation. However, the coil material isn’t stated anywhere and I do wish Wotofo (and other vape manufacturers) do include this important information, especially for vapers with allergies to certain metals. All in all, I am very satisfied so far with what I’ve seen!

Salient Features of this RDA include: 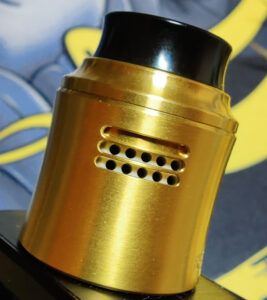 At the outset, the RDA looks stunning especially in the gold colour I received! It isn’t styled in a glossy way, making it really easy to clean and maintain. No fingerprint marks anywhere, I am happy to report!

The stock drip tip is a little on the tall-ish side, perhaps to show off the curving/narrowing in the middle like the RDA barrel. Nonetheless, it was comfortable enough to use and I didn’t feel any compulsion to change the drip tip during my testing.

The top cap spins to adjust the airflow, and the RDA I received has the top cap at the perfect tolerance to hold its position and yet loose enough to disassemble easily. I was really happy with this as some RDAs I’ve used in the past need the strength of a God to take it all apart!

Now, the build deck. Most RDAs I’ve used have a flat or hollowed-out build deck to house the cotton and juice. The Recurve V2, however, is a unique build deck that only really has the wicking wells/juice wells/cotton wells as the hollow points. Additionally, the deck itself is of a concave shape, meaning if you drip directly onto the coil, the juice will collect first underneath it before finding the juice wells as you move the RDA around. It’s not that much of an issue, but it does mean that you need to be aware of this and make sure the juice goes to the wells. Otherwise, you will find that that juice collecting from underneath the coil may restrict your airflow a little bit. 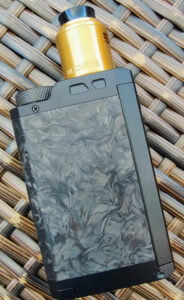 I mentioned the deep juice wells as a misnomer earlier, and this is because of the way the wells have been cut into the deck. True enough, they look deep, but with cotton inside it, especially with 2 x 3mm cotton laces tucked inside, that space fills easily with not a lot of room for additional e-liquid. I do wish Wotofo cut the wells a little wider to easily allow e-liquid through. Alternatively, they could have just had a typical post-less build deck, leaving plenty more room for cotton and juice.

The post screws can be found on the side of the deck. The deck also has a couple of holes to anchor the airflow adapters. Speaking of, these adapters tailor your vape as the honeycomb style holes around it smoothens out the airflow. You can opt to use or not use these adapters, but the overriding thought is that in addition to improving the airflow, the adapters are supposed to improve the flavour as well by reducing the chamber space inside the RDA.

With the squonk pin included, it will be a breeze to use this RDA in squonking mode by simply swapping out the 510 contact pin for the squonk pin. The RDA chamber locks into place with the deck and doesn’t spin freely, which is another pro in my book as it ensures alignment between the airflow holes and coil/s.

I first tried this RDA in a dual coil set-up. I used a couple of handmade fused Clapton coils, that ohmed out at 0.16 as expected.

Building it was really easy. I would recommend trimming your coil leads anywhere between 7-8mm if you’re using a Coily tool (as there is no coil guide included in the kit). I trimmed mine to 7.5mm so that they are raised enough to allow air to pass underneath the coil. To my preference, I spaced my coils out for better heat distribution, and adjusted coil positioning (straighten and align) as needed.

For wicking, I would suggest combing your cotton out to enhance wicking and then cutting each end to about a few millimetres from the bottom of the base. In doing so, you can ensure that you will have enough length to wick any juice from the wells- remember that these are quite deep. Don’t cut them longer than that though, else you may encounter some wicking issues. 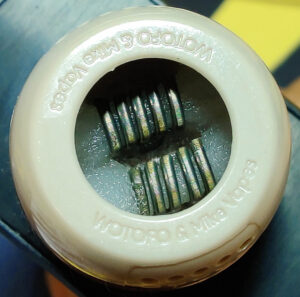 With the 3mm cotton tucked in and coil primed, I did see that the juice wells are almost all covered in the wick. And so, I would suggest that you try to part each wick separate as much as possible to facilitate the movement of the liquid into the juice wells. But, as mentioned earlier, the cotton stuffs up these wells and there’s hardly any space to squeeze additional e-liquids through.

I vaped the RDA with and without the dual coil airflow adapter (65-70W), and to be perfectly honest, the flavour quality between the two isn’t that massively different. Flavour was decent (6.5/10 without the adapter, 7/10 with), but I was expecting a significant enhancement with the reduced chamber via the airflow adapter. Another thing to mention is that when using the airflow adapters (both), condensation around it will inevitably develop; not in great quantities but enough to be noticeable.

Changing into a single-coil set-up, I used the 5mm ID coil supplied in the kit. The building steps are pretty much the same as I described above for the dual-coil configuration, except that I didn’t space out this coil. I trimmed the cotton to similar lengths as above after combing it out, and with the 5mm cotton, there is definitely more space for e-liquid around the wick ends when they are tucked into the juice wells.

I also vaped this build configuration with and without the airflow adapter (55-60W). Now, this is actually where I did notice the difference in using the airflow adapter in that it did increase the flavour intensity! I would rate the flavour without the adapter at 7/10, and with the adapter at 8 to 8.5/10. I was really pleased with this coil configuration, so much so that it is what I am vaping on now as I write this review.

For certain, the single-coil configuration is my preference when using the Recurve V2 RDA.

About the airflow, it is an airy RDA for sure! But the airflow control works quite well in that it can give you anywhere between a restricted DL draw to a real airy DL draw. As for clouds, it’s not as heavy as other RDAs on the market, but that is absolutely fine by me as I do prioritise flavour over clouds.

I can recommend this RDA indeed for flavour, especially when the 5mm ID coil is used. Although I did mention some niggly bits during the review, primarily about the build deck, it is still a decent RDA to use for as long as the user will be aware of the little accommodations that need to be done for the best vape experience.

Is it a worthy upgrade from the Recurve V1? Well, I wouldn’t necessarily call it an upgrade, as in a sense, there are quite a lot of changes with this V2 that it could have easily been another RDA. As said, I don’t have the V1 to make a comparison from experience, but the V2 appears to be at least as good as the V1.

And that’s it! Once again, my sincerest appreciation again to Cara and Wotofo for sending this RDA for the review! Go check out the Recurve V2 and the other products at the Wotofo store via the links in the review.