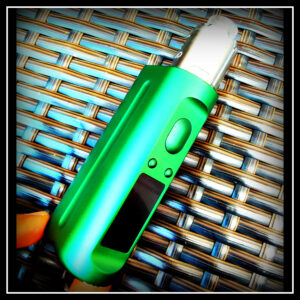 How are we doing today, vape fam? I am back again with another hardware review! This time, we will be looking at the Hellvape Arez 120W Mod, Hellvape’s first-ever gambit into the regulated mods market!

This device was kindly supplied to me by Sourcemore.com for review purposes. In case you are not yet familiar with Sourcemore, they are one of the biggest vape retailers based out of China. They sell a wide variety of vaping gear, and they run crazy sales from time to time. Use AREZ, and you will get a cheeky discount off this device at Sourcemore.com. So be sure to check them out for your vaping supplies!

Back to the Hellvape Arez 120W Mod – Hellvape had released mods before but they were all mechanical or semi-mechanical. Hence, there was quite a lot of anticipation towards the release of the Arez as their first-ever fully regulated mod.

Hellvape is probably more popular for its atomisers including well-known RTAs such as the Fat Rabbit and Dead Rabbit, and RDAs such as the Hellbeast RDA. They do indeed love “rabbit” in the name, so colour me surprised that they did not call this mod another “rabbit” (Sexy Rabbit mod? Hmmm…).

As always, I will be reviewing this mod as an average vaper, as most of us in the community are!

I was sent the retail version of the Hellvape Arez 120W Mod, the packaging of which contained: 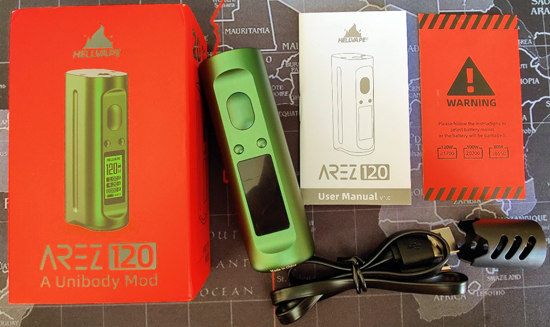 The mod’s packaging was in Hellvape’s now standard red-orange and dark grey colourway. As is Hellvape’s style, the packaging was peppered with printed information that is done rather creatively in fonts of varying sizes. You will find an embossed photo of the mod in front of the sleeve, with mod parameters and kit contents at the back of the said sleeve. The inner box was rather plain, which is cool as it’s really what’s inside of it that counts! The mod is on top of a foam tray, and the 18650 adaptor is inside the battery compartment, ready for use. The mod’s accessories sit under this foam tray. All in all, everything looks great and in line with Hellvape’s recent products.

And Now, the Mod! 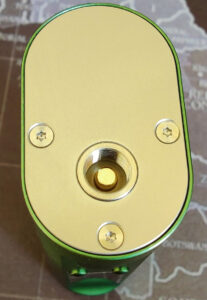 The Hellvape Arez Mod is made mostly from aluminium alloy, thus making it very lightweight. The 510 plate and battery doors are made with stainless steel for practical purposes. This mod comes in just three colours: matte black, gunmetal, and blackish green which is the colour of the mod I received. The limited number of colours available may be a con for some, but I think Hellvape are going for a more premium versus mass appeal with this mod. And I got to say, the workmanship and finish of this mod are superb (*chef’s kiss*)! The finish is ultra-smooth and yet provides enough grip to prevent slipping from the hand. Its surface also doesn’t attract fingerprints, which is a huge pro for me as I do get annoyed when my gear is dirty!

What sets this mod apart from most of its competitors on the market is that the entire mod shell/body itself was CNC engraved from a single block of metal. What that means is there are no pieces joined together to make up the body, and therefore no structural breaks which make this mod extremely durable. 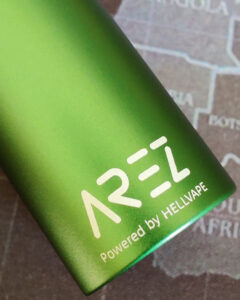 It is quite small for a single 21700 mod and combined with how little it weighs, it makes it an ideal mod for travelling or being out and about. The mod has very little branding, and if you have been reading my reviews a while, you’d know how much I love devices that do not scream brands and device names! Obviously, a pro for someone like me.

The front of the mod has the fire and adjustment buttons as well as the screen that displays battery life, power, ohm load, voltage, and puffs. This is all well and good but unusually, the adjustment buttons are actually on top of the screen. Not quite sure why Hellvape did that- although I’m not bothered by it, some vapers could be as one’s thumb/finger will be blocking the screen when adjusting via these buttons.

The USB-C port is at the bottom of the mod. Some may be bothered by this because it means that the mod (and therefore any atomiser connected to it) will be on its side inevitably whilst charging instead of being upright. Hellvape could have put the port on any of the two sides of the mod, or even behind it, but perhaps the current positioning of the port may have something to do with how they machined the mod. Or, maybe they wanted to preserve that “solid” look of the mod.

The battery installs from the bottom of the mod via a battery cap that screws on and off. The threading of this cap is really smooth, with no crunching whatsoever even when installing a battery. Battery polarities are also clearly marked.

Overall, the mod may look plain to some, but in my eyes, it looks freakin’ premium! Hellvape’s website says that this mod was inspired by a very popular laptop that was constructed in a similar fashion. And, to be fair to Hellvape, they did deliver on that vision!

Operating the mod is very simple, especially as it has no other mode than wattage: 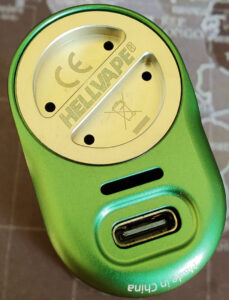 The adjustment buttons go in 0.5W increments up to 10W, and in 1W increment thereafter. Not an issue for me, but maybe for some who like to fine-tune their vape to the decimal.

As for how the mod performs, it did quite well in my daily use and tests. It performed better at MTL than DL though in my experience, and that’s because I felt that the mod was sort of struggling a little bit at over 50W, even with a 21700 battery. But I suppose that’s really not a huge surprise for single-cell mods- that more than likely, they will not perform the same as a dual cell mod at medium to high wattages.

Having only the power mode is probably going to be a con to some vapers. Indeed, even I found myself wishing for at least a bypass mode, or even a soft/normal/hard kind of fine-tuning of the power mode. Normally, having a wattage only mod doesn’t bother me, but I do feel like Hellvape sort of missed a trick here by not including these modes I mentioned in their chipset. 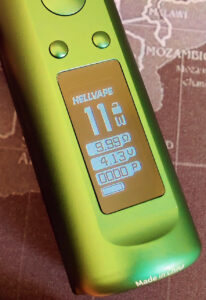 One other thing to mention is that, although the buttons feel very nice and tactile, the fire button needs to be pressed down harder than usual whilst vaping, or else it cuts itself off. At first, I thought it was the mod tripping up, but since it was happening consistently and the problem disappeared as soon as I made the needed adjustment, I thought it best to mention it here. Not a huge deal though, in my opinion, as the vaper just needs to press slightly harder after than initial response to sustain the mod’s firing process.

Now, I know it sounds like I’m just full of cons when talking about the mod’s performance, but to be honest, the mod was a joy to use despite these things I mentioned. It fires super quick with no delay (just remember to press hard on the fire button for longer), feels very nice and ergonomic in the hand, and is very pocketable especially when paired with an MTL RTA. And as I mentioned before, it just looks the business when you pair it with a matching atty!

As Hellvape’s first venture into the regulated mods market, they haven’t done a bad job at all with the Arez Mod. It will appeal to a wide section of the vaping community, such as me, who just wants a reliable and portable mod for whatever daily living demands. Sure, there are some niggles I mentioned, but none of these is dealbreakers in my eyes. The mod looks so beautiful and definitely elevates the vaping experience. You know what I mean when you feel a little posher because you’ve got that silky smooth mod in your hand!

My sincerest thanks again to Joyi and Sourcemore.com for sending this mod for my review! To pick up the Arez, check out the links to Sourcemore at the start of the review.