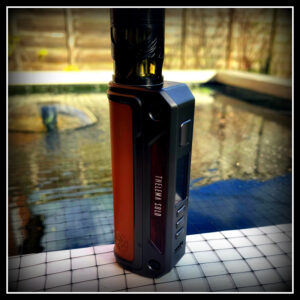 A review today for a single battery 100W mod, this is the Thelema Quest Solo by Lost Vape. This was supplied by the folks over at Sourcemore. You will find all the best in vaping at great prices on their website, along with a clearance selection, 24-hour sales and weekly deals. It’s definitely worth checking them out when you are in the market for new vape products.

If you are purchasing the Thelema Solo at Sourcemore, make sure to add the code SOLOM at checkout to currently pay just $27.99 (£21.17 conversion as of today). That has to easily be one of the cheapest prices for this mod out there at the moment!

The Thelema Solo does also come as a kit too that includes the UB Pro pod tank, which is also available at Sourcemore here if you are wanting the tank with it.

Let’s jump in and see what it’s about.

The Thelema Quest Solo by Lost Vape comes in a branded white cardboard box with an outer card sleeve. On the top of the sleeve is the printed device title and brand with a large embossed image of the Thelema Solo in the colour of the mod in the box. There are 3 key features of the device printed next to it. The sides of the box have the printed brand and device title along with the slogan ‘The Modern Demarcation’. The bottom of the sleeve has printed contents, warnings, Lost Vape’s social media info, bar code and authenticity panel.

The contents inside the box are:

Lost Vape’s Thelema Solo is in their Quest series using the Quest 2.0 chip. It is a single battery mod that runs via a 21700 battery or a 18650 battery using the included battery adapter. The device powers from 5W up to 100W. 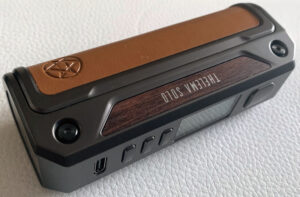 The Thelema Solo measures 97.5mm in height, 28.5mm in width and a depth of 39mm and is built with Zinc Alloy. It is a C-frame type device with a battery door that simply slides off the back. The removable battery door has the colour detail on it depending on your style chosen, which in this case is Brown Leather and has the Lost Vape logo etched in at the bottom. The front sides of the device again have detailing panels. On this colour device, it is a Wood effect with ‘Lost Vape’ printed on one panel and ‘Thelema Solo’ printed on the other.

On the front of the device is the main large power/fire button at the top above a 0.96′ TFT display screen. Situated below the screen are three equally-sized buttons. These are the up/+, down/- and the select button. Under the buttons at the bottom is a Type-C charge port. At the top of the Solo is the 510 port that should comfortably fit attys up to 26mm.

You can purchase the Thelema Solo in a variation of 8 colours and designs. The one being reviewed is listed as Gunmetal  Ocre Brown which has Gunmetal Zinc Alloy, leather back panel and Ocre wood effect detailing on the mod.

The Thelema Quest Solo has a 0.96′ TFT display that clearly shows the current settings of the device. All info including current power, battery level, resistance and puff counter is included. To change modes and settings, there is a select button sitting centrally to the up/+ and down/- buttons.

There are 5 vaping modes that are; Wattage, VPC, bypass, voltage and TC mode (SS904/SS316/Ti/Ni). To select between these, simply highlight the Power option, press select then up/+ or down/- buttons to choose the preferred mode, then select button again to lock-in. To then change power or temperature, highlight the number and adjust with up/+ or down/-, the select button again confirms. The main screen also has a Soft, Normal and Hard setting so you can alter the vape. You can also select the puff counter to reset or select again to keep the current puff count.

At the bottom of the main screen, there is a settings menu. Selecting this menu will give you various adjustable settings. ‘Atomizer’ gives the info on the current resistance, ‘Screen’ where you can change the display brightness, ‘Color’ gives an option to change the display’s colour between 6 colours, ‘User’ where you can store preferred vaping options to switch easily on the main front screen, ‘Reset’ resets the mod and ‘About’ displays the Device version.

You can lock the settings and buttons by simultaneously holding the up/+ and -/down buttons, and the same again to unlock. The fire button is still active when it’s on lock mode. To power the device on and off, it is the usual 5 fast clicks of the fire/power button.

I’ve been using the Thelema Solo daily for the last few weeks within my daily setups, and it’s a superb single battery mod. It is basically a single battery version of the larger Thelema and essentially a condensed version, with an added bonus of being single 21700 compatible.

Again like its bigger brother, the Thelema Solo is a stylish design and feels like a sturdy comfortable device in the hand. The fire button is big and clicky and comfortable on the vape via thumb or finger firing. Menu and settings are the same as the Thelema too and a breeze to use once you learn its layout.

The vape when using the mod is great with a very responsive fire and feels true to the power setting used. It’s clear the Quest 2.0 proprietary chip is well made. The Solo itself is well made also which is rugged and looks good. One minor point is the panelling on the battery slider door is a Leather sticker, as opposed to the squidgy type design seen on other devices. Even so, it looks decent enough.

I would definitely recommend the Thelema Solo if in the market for a single battery mod. Lost Vape has released quite a few devices over the last year and this one is definitely up there.

To pick up the Thelema Solo by Lost Vape, check out the links to Sourcemore at the start of the review and remember to add that code for a better price! Thanks for reading!