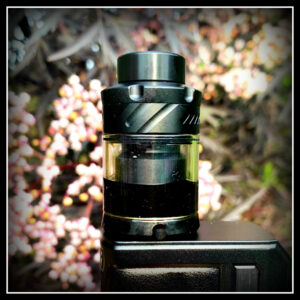 A review today for a new RTA that is already proving a popular talking point among vapers; this is the Dead Rabbit 3 by Hellvape. This is the RTA version and is not to be confused with the recent Dead Rabbit 3 RDA. As hobbyist vapers will know, Hellvape has continually released some great RDA’s and RTA’s in recent years, a lot with the whole ‘Rabbit’ series. You can check out their website via the link above to see the range, as well as a few regulated and mech mods.

So let’s dive in and see what the new Dead Rabbit 3 RTA is all about.

The Dead Rabbit 3 by Hellvape comes in a bright orange box with a top black cardboard lid, featuring a clear window to see the tank inside. The top of the box also has the branding and title with the Rabbit logo all printed in bright orange. On the left side has a printed title and on the right side has a graphic of the RTA and title. Up the top has the printed slogan ‘Evoke your vaping genius’ and the bottom side has two labels; one with the printed barcode and RTA colour and the other is a scratch for authenticity panel.

On the bottom of the orange inner box has printed key features of the RTA, Hellvape’s contact info, warning graphics and batch number label. There is also the printed kit contents list, which are: 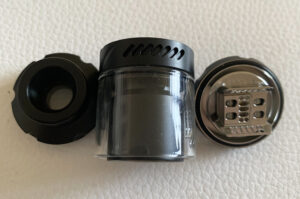 The Dead Rabbit 3 RTA has a diameter of 25mm and a height of 50.5mm to the top of the drip tip. It weighs 59g and has an E-liquid capacity of 3.5mL in the straight glass or 5.5mL if using the supplied bubble glass. TPD countries will have 2mL capacity versions, though there will no doubt be a way around that by buying the larger glass separately.

The RTA has a dual coil deck, though possible for a single coil build also. It has top to bottom airflow and so is non-leaking.

At the top of the Dead Rabbit 3 RTA is a removable 810 drip tip sitting into the top cap. This grooved designed top cap quarter turns off to reveal two large fill holes for E-liquid refilling. Situated under the top cap is top airflow, controlled by turning the AFC ring to open and close the 7 airflow slots on each side of the ring. The middle consists of the main tank glass with the chamber going up the middle inside. The chamber has ‘Dead Rabbit’ and the Rabbit logo etched onto it. At the bottom of the chamber is the deck which screws up inside. Inside the chamber where the deck sits are slots where the deck airflow grooves sit in. Printed on the bottom of the deck is the ‘Dead Rabbit 3 RTA’ with Hellvape branding and obviously the 510 pin which is a gold screw connection.

This Dead Rabbit 3 RTA is in Matte Full Black, but you can also purchase it in standard Matte Black, Stainless Steel, Gunmetal, Gold, Rainbow, Blue and Purple. 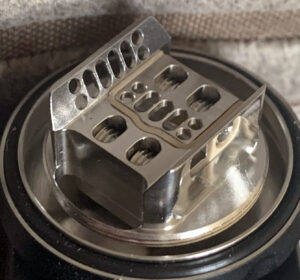 The deck on the Dead Rabbit 3 is a postless deck featuring an internal honeycomb and slotted airflow. The deck is a dual coil configuration but it will also cater for a single coil if you prefer.

The coils are secured into the deck by flathead screws on each side. Inside the box is a coil cutting tool with a mark on the side, so the coil legs can be cut perfectly to size. On each side where the coils sit on the deck are slots at the bottom for the wick ends to be placed into. Using both coils supplied in the box will give you a resistance of around 0.18Ω.

In the accessory bag supplied are Allen key screws so if you prefer using these to the flathead screws, you can swap them out. They also double up as spares if you need them and are happy using the pre-installed flathead screws.

The Dead Rabbit 3 by Hellvape is a brilliant RTA for the experienced vaper. For a cloudy, flavourful DTL vape, it is impressive.

Cosmetically, it is probably the nicest looking out of the Rabbit RTA range so far. It is aesthetically pleasing with a grooved design around the top cap and deck outer. It is a very clean looking tank with good machining throughout and no grinding when screwing in the deck.

Adding a build to the Dead Rabbit 3 deck is trouble-free with easy access to the screws, which are not too small and fiddly. The is decent room on there for two large coils and the two Hellvape coils in the bag are perfect. Without the bottom airflow and any potential leaks, the RTA isn’t so fussy when wicking. So long as you add enough to avoid dry hits, you should be good.

The vape from the Dead Rabbit 3 RTA is great. Dense clouds and full of flavour with plenty of airflow via the top-to-bottom airflow system used on the tank, which obviously can be adjusted with the AFC at the top. For a decent direct to lung vape, you probably won’t find better out there at the moment with a similar price bracket. A very good RTA that is well worth a purchase.

To pick up the Dead Rabbit RTA by Hellvape, check out their website via the links at the start of the review.