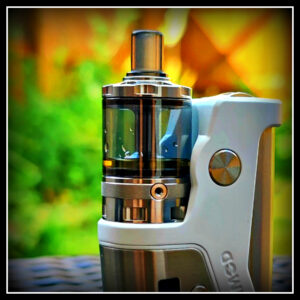 What’s up, my vape-ilicous lovelies? I am back for another hardware review, and today we will be looking at an atomiser that has been out there for a while. Although not a new release, being an avid MTL vaper myself, I thought that it would be at least interesting to check out a very popular tank within the MTL vaper circle: the Ambition Mods Bishop MTL RTA!

This device was provided to me for review purposes by Fasttech.com. To anyone who doesn’t know them by now, Fasttech stocks a massive amount of vaping gear and supplies that are priced very well, including the latest and greatest vape kits like the one we are going to be looking at today! Do check them out for your vaping needs as most items ship for free or at low cost, making them a fantastic choice for us vapers.

The Bishop MTL RTA, although manufactured by Ambition Mods, was designed by The Vaping Gentlemen Club. I have to admit that I do not know much about The Vaping Gentlemen Club, other than what’s on their social media and website that they design high-end vaping hardware and as well as produce E-liquids. They seem to be an Italian outfit judging by their website. In any case, their collaboration with Ambition Mods brought about this RTA we are going to be looking at today.

As always, my review will be based on my experience in using this device as an average vaper.

I was sent the retail version of the Ambition Mods Bishop MTL RTA, containing: 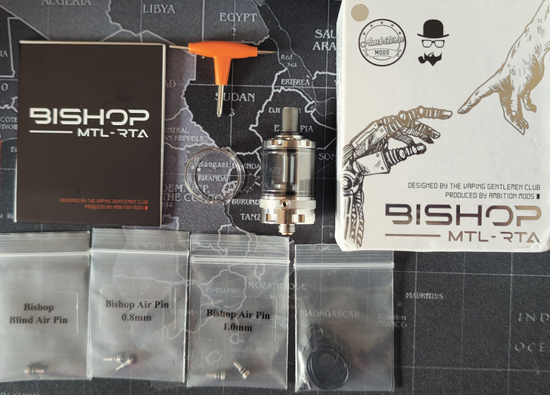 The Ambition Mods Bishop MTL RTA comes in a small but nice and tidy white box, with the logos and information about the collaborators printed in front alongside some nice drawing of two hands whose fingers are about to touch each other (think of that famous Michaelangelo painting). Package contents, socials, and manufacturer information adorn the rest of the box.

The atomiser and spare glass sit on a foam tray, with the accessories and paperwork packed underneath. Overall, it’s a simple and easy presentation, but it doesn’t really scream high-end to me if I’m being honest. But perhaps this isn’t what Ambition Mods and The Vaping Gentlemen Club were going for with this RTA? Hmmm…

B. Aesthetics and Mechanics

The Bishop MTL RTA is not something I would describe as fancy-looking. There are no intricate engravings or logos to be found apart from the bottom of the deck that has the atomiser name and a serial number. It looks simple but solidly built, mainly because of the smooth machining employed in creating the atomiser.

In the silver colour I received, it looks a bit discrete but classy too. It can easily pair up with most of the mods I own and won’t look awkward or out of date. The choice of smoked or clear glass does add a dimension to customising this atomiser as you like. Personally, I like it better with the smoked glass!

Up top is a straight and smoked plastic 510 drip tip that attaches to the top cap. Now, the top cap is actually not removable, as to fill this tank, you actually need to unscrew the bottom portion from the chamber and glass upper portion, and then refill the tank from the bottom. Although unusual, it does mean that you will have loads of fill space as essentially you can use most of the inner area covered by the glass to fill – so you shouldn’t have any issues in using whichever kind of E-liquid bottle.

Due to this refilling method though, putting the tank back together again after refilling can be tricky. For the mess-free filling, I would advise you to hold the top portion holding the e-liquid upside down, then put the bottom portion on top whilst threading it back in to reassemble the atomiser when you are done refilling. This way, you won’t have e-liquid spilling over or sticking to your fingers.

Replacing the airflow pins is very easy too. As the deck is just held in by o-rings and grooves, you’d just need to screw the atomiser down into a 510 connection (mod, tab, atty stand), and pull the tank up to reveal the build deck. Once the build deck is separated from the rest of the tank, you can gain access to the airflow pins to replace them. Simply push the pins out, and then push the new pins into the knurled ring and you’re done! 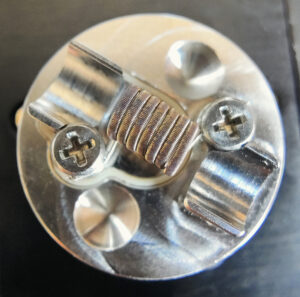 The build deck is rather simple and very easy to build on. But, one thing I’ve found is that using a coil wrapped counter-clockwise will provide the most comfortable build due to how the post screws for the coil leads are positioned. So, do bear this in mind especially as most commercial coils are wrapped clockwise, or when you are building your own.

The deck itself does have a relatively generous space for MTL coils. I would suggest not going over 3mm ID for simple round wire coils, and not over 2.5mm ID for fused claptons and the like. I would not recommend using alien coils or coils more exotic than that on this- this is not the build deck for those.

Now, in installing the coils, the deck actually has guides for your coil jig to rest on. These guides also indicate how the coils should be positioned. So, simply rest your jig on these guides and then trap the leads under each post screw. That’s it! Easy-peasy!

One thing to bear in mind is how high you’d want your coil to be. In my case, I made sure that I raised the coil up a little bit (but not too high) so that the air hits the lower half or underside of the coil. This positioning gave me the best flavour from this atomiser.

In terms of wicking, you just need to put the right amount of cotton according to your coil’s inner diameter. Not too tight or too loose and you should be golden. There’s no need to thin the cotton out too much- just make sure that the strands are straight and have no clumps. Then cut the wicks right to the edge of these guides or the edge of the deck, and that will be sufficient to avoid any flooding, leaking, or dry hits.

I have done a few builds in this RTA and found that it gives the best flavour using simple round wire coils, which is a new experience for me! Usually, superfine MTL claptons give me the best flavour due to the larger heating surface, but that simply wasn’t the case for me in using this atomiser. Using a simple fused Clapton (SS316, 2.5mm ID, 0.6 ohms) did give me a juicy and warm vape, but I found the flavour to be a little dull. Whereas, a simple round wire build (KA1, 3mm ID, 0.6 ohms) gave me a punchier flavour. I have to admit that I cannot explain why this is, but I can only share my experience with you all. 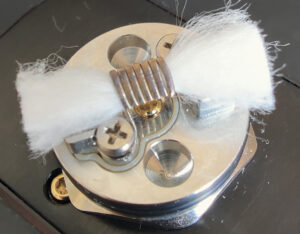 In terms of the airflow, for the way I vape, I found myself using the 1.2mm air pins most of the time as I like a medium to loose MTL draw. The 1.0mm and 0.8mm give a true tight MTL (even more so if you use the blind air pin)- so this RTA definitely has something for fans of tight MTL vaping. This pin system works well and is easy enough to swap over without the need for any tool, which of course is a pro in my book.

The Bishop MTL RTA gives a very smooth and silent draw alongside great flavour, with the right coil build of course. I didn’t experience any dry hits or leaking with this RTA either. And, putting everything together, I can say that this RTA may look unassuming from the outside but it is built to be a performer!

The Bishop MTL RTA gets a Yay from me, purely because it is a decent MTL RTA. It is very easy to set up and vape on. With the generous juice capacity of 4.0 mL, refilling is kept at a minimum which is a great thing, since its refilling system is not exactly the most convenient.

But is it the King of MTL RTAs? In my book and amongst the MTL RTAs I have used, I don’t think so. Don’t get me wrong, it is a fine RTA for MTL purists, but for my personal taste, it comes close but falls a little short in the flavour department. I am sure that there are people out there who will disagree with me, however, I can only judge something based on my experience with it.

Saying that though, I still recommend this atomiser for MTL vapers, even the purists, as it is still a solid performer of a tank. It is meant for vapers who build and has a firm grasp of Ohm’s Law since using it does involve a fair bit of DIY-ing, especially if one will be wrapping their own coils.

Once again, my deepest thanks to Fasttech.com for providing the Bishop MTL RTA for my review! To purchase this, head over to Fasttech at the links at the start of the review.