Pump Squonker by Across Vape & Dovpo 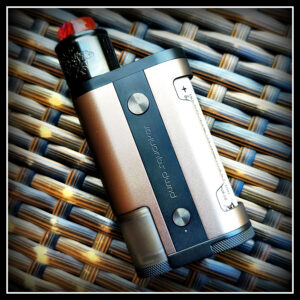 Dovpo and Across Vape Pump Squonker – An Innovation in Squonking?

Ooooh squonking! Vapers across the world love or hate it. But for me, I actually like it if I’m in the mood for high wattage, direct lung vaping just because I save loads of effort and time dripping (which should explain why there are more than a few squonk mod reviews in the blog!).

Squonking did sort of boom several years back, but nowadays, new squonk mods are produced few and far between. So, whenever a new squonker device comes out, I am always interested in it and how it plans to differentiate itself from other squonk mods. Because of the seeming rarity of squonk mod production, the “old reliables” in the market haven’t really changed that much over the past few years.

Now, automatic squonking isn’t exactly a new thing. There have been mods and kits produced whereby a mechanised pump delivers the squonking action versus the squeezing of your typical silicone bottle. So, with the release of this newest squonk mod in the market, the Dovpo x Across Vape Pump Squonker, we will look at what this mod does, how it performs, and what makes it different from other squonk mods.

This mod was sent to me for review purposes by Dovpo (thanks Daisy!) and was created by Dovpo in collaboration with Across Vape. I have to admit that I do not know that much about Across Vape, but from what I can see on their website and socials, they appear to be vape hardware designers and manufacturers, having designed some atomisers in the past. Across Vape looks to have been heavily involved with the design of this squonk mod, which seems to focus primarily on the squonking experience. So, without further ado, let’s get down to it and show you all it can do and go through my experience of using it as an average vaper. 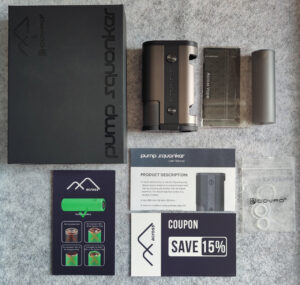 I was sent what I think is the sample version of the Dovpo& Across Vape Pump Squonker Mod containing:

As you will notice, there is no USB charging/update cable included as the mod itself doesn’t have a USB port. You’d need to make sure that you can charge your batteries externally, which is what I always recommend anyways for battery safety and longevity.

The inclusion of battery wraps in the package does add a special something, especially as these are Across Vape-branded. Also, because of the way the mod is designed, part of the battery wrap will be exposed and visible when using a 21700 cell, so this special wrap will look really cool on the mod!

The mod comes in a nicely designed, “murdered-out” black box with the usual manufacturer info, Dovpo’s and Across Vape’s socials, and package contents printed on its back.

The mod and all its accessories sit in a thick foam tray- a little too much in my opinion and Dovpo/Across Vape could have opted for a smaller box for less carbon footprint. But judging by the presentation, I suppose they are going for a premium feel and that includes a more opulent unboxing experience as this appears to be a mid-range to a high-end type of vape device.

And, boy oh boy did they achieve that with how sexy this mod looks! It is finished smoothly with no rough edges, thanks to CNC Lathe precision machining. Despite the mod being mostly made from metal, it is actually quite light and comfortable to use. It feels good in the hand. The gunmetal finish I received is especially pleasing to the eye, with the black 510 platform and panel housing the two buttons of the device contrasting nicely with the gunmetal mod frame. One thing I did note was that the buttons had some play, even when just moving the mod about. But keep in mind that this is a sample mod and so the retail version may not have this issue. 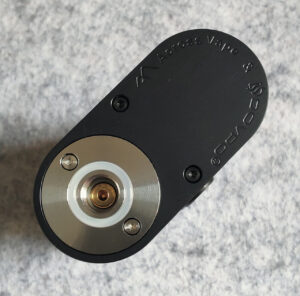 The 510 plate up top appears to be screwed onto the platform which tells me that this connection should be able to stand the test of time. The e-liquid reservoir (squonk bottle/receptacle) and battery cap are at the bottom of the mod with nicely knurled metal bases.

The battery cap is the type that threads into the mod, which is good in my eyes as these usually endure a lot better than sliding battery doors/caps. Battery orientation is clearly marked as well which is always a pro. One thing to note and especially when using a 21700 cell is to make sure that about halfway into screwing back the battery cap, to apply a little pressure whilst turning the cap to ensure that the cap will be fully secured onto the mod with no visible gap between the cap and mod frame. 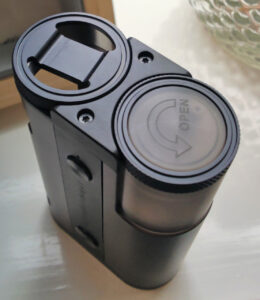 The cut-out in the mod exposing the battery (21700) may be a con for some and I would agree – hopefully, Dovpo and Across Vape will release some sort of snap-on battery cover in future to fully protect the battery.

Operating the mod is very simple, having just the two buttons:

And so, we get to the parts that are unique to this mod. One of them is the squonk bottle or e-liquid reservoir. I’m partial to calling this an e-liquid reservoir as that is mainly what it is: storage for e-liquid that will be sucked up by the pump. This tinted and frosted reservoir is made from PC plastic, and threads into the mod as well. It’s this threading action that essentially acts as the refilling method: detach from the mod to fill, and screw back onto the mod to put together with the pump. 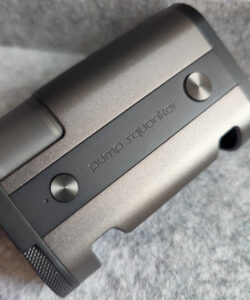 At 9mL, it is quite a generous e-liquid capacity which is easily competitive with mainstream squonk mods in the market. Also, the refilling was quite fuss and mess-free as the reservoir itself doesn’t flex: it’s this flexing of silicone bottles that is sometimes an issue for me, particularly when reinstalling a squonk bottle into the mod (because I inadvertently squeeze it whilst reinstalling and I’m sure I’m not the only one!). Needless to say, I was glad to see that that issue doesn’t apply at all with this mod! Just make sure though to keep the mod upright when detaching/reinstalling the reservoir with e-liquid inside for obvious reasons.

And the other major and unique feature of this mod is of course the mechanised pump. This pump delivers e-liquid to the atomiser at a constant rate when the button is pressed. As I said, you just need to adjust how long you press the button depending on your atomiser capacity and how you want to vape. For example, in the atomiser I was using, I found myself pressing the pump button for no more than 5 seconds at a time as doing so delivers enough juice to keep my wick saturated without flooding my atomiser. This timing is important to gauge, particularly because the pump does not suck back excess E-liquid.

So, if you over-pump, then the e-liquid stays in the atomiser and will not be recycled. Now, this can be a good or not-so-good thing depending on what’s more important to you. On the plus side, it keeps your e-liquid fresh as e-liquid and even condensation will not mix with your main e-liquid supply. But on the flip side, if you’re not careful then you can flood your atomiser. Personally, being a flavour-chaser, fresh-tasting E-liquid is more important to me and so I don’t see this as a con; but at the same time, I do realise that not all squonk vapers think like I do.

The pump does make a sort of whirring noise when in use, but it’s not too noisy or overwhelming. In fact, it’s not any louder than firing an atomiser!

The Pump Squonker mod performed well enough, especially in the squonk department. I didn’t experience any issues with the mechanised pump, including any leaking issues anywhere on the mod or reservoir. In fact, the pump filled up my RDAs rather quickly which is always good especially when chain vaping (like I often do).

The mod fires quickly too. However, and I feel that this is my most significant note on this mod, it felt like it was firing on the weaker side for me. With a 0.2 ohm build, I was getting a relatively cool vape. It’s a familiar build to me which I would usually run at 60W or so on a regulated mod, but the Pump Squonker level of power seemed to be at just around 40W or so. A build like this that is run on bypass on other mods would get around 80W of power, and so this difference in power really stood out for me. It still gave me a decent vape experience, don’t get me wrong, but I felt like the Pump Squonker could be made so much better with power regulation built into it.

And because of that, battery life appears to be managed exceedingly well; my 21700 cell lasted for over a day before needing to be recharged. This wouldn’t have been the case if it were firing as I expected, i.e., at about 80W based on my build.

As a way forward to innovate the squonk vaping experience, the Pump Squonker is solid in that department. For me, it has essentially perfected and simplified the use of mechanised pumps in squonkers. I mean, if all squonkers in future used a mechanised pump like the one in this mod, I would be a truly happy bunny!

This mod is for experienced vapers, particularly those who have adequate knowledge and experience with applying Ohm’s Law to vaping. Speaking of Ohm’s Law, for a warm DL vape, I would recommend building no higher than 0.2 ohms for this mod, as higher builds may yield an even cooler vape.

But as a whole, the Dovpo and Across Vape Pump Squonker looks and feels like a quality mod, and delivers a seamless squonking experience.

To pick up this Pump Squonker device, head over to Dovpo via the links at the start of the review. Once again, my deepest thanks to Dovpo for providing the Dovpo x Across Vape Pump Squonker Mod for my review!