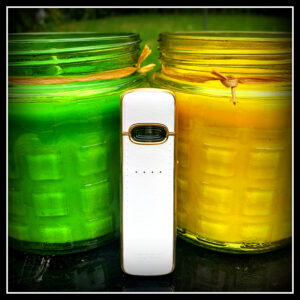 A review today for a new pod kit which looks very stylish, this is the Vmate E by Voopoo. This kit adds to their smaller pod kit V range; like the original Vmate and V Thru. Voopoo has become one of the more popular vape brands over recent years with good sturdy devices like the Drag series putting them on the map. To check out more of their products, visit their website above, but you might want to mute your speakers first 😉

Let’s jump in and see what the Vmate E is about.

Voopoo’s Vmate E comes in a Black cardboard box where the inner box slides out the bottom outer side. The outer box is of a kind of felty-type cardboard, so more of a high-quality feel. Embossed in Gold on the top is a graphic of the device along with the title and brand. On the right side are printed QR codes of Voopoo’s website and socials along with two labels. One is a barcode with the colour of the device printed above and the other is the serial number. The left side of the box has four printed key features of the Vmate E, along with another QR code for Voopoo’s tech support.

The top side of the outer box has a simple gold printed Voopoo branding, while on the bottom are the printed contents, warnings and Voopoo’s contact info. There is a label stuck on the bottom here which is the scratch-for-authenticity panel.

The contents inside the box are:

You will also find a little pouch of Silica Gel that comes completely free of charge, so feel free to disperse in water for a few weeks to grow your own aqua monkeys.

Bear in mind, that this is a sample version so the retail version may appear differently with the packaging. 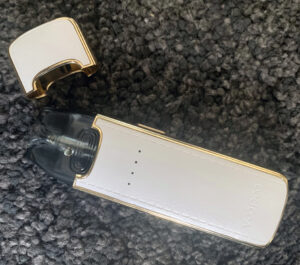 The Vmate E by Voopoo is a small pod kit device. It measures 99.5mm in height, 30.5mm in width and a depth of 17mm. The device runs off an internal 1200mAh battery using Voopoo’s ITO technology and Gene chip. It is built with Zinc, Alloy and Leather. At the top is a removable cap protector that slots nicely over the cartridge and connects to the main body.

On the front of the Vmate E is the Leather panel with a ‘Voopoo’ branding etched in at the bottom. Further up near the top are 4 small LED lights. These light as you puff on the device and give you a real-time battery level. These go out as the battery runs down. Around the sides and rear of the Vmate E is a shiny Gold finish. On the left side is a small ‘Designed by Voopoo’ and on the back is printed ‘VMATE E’ with small ‘Gene’ branding printed at the bottom. Over to the right side is a small simple Airflow slider so you have some control over the airflow. Situated on the bottom of the Vmate E is the Type-C charge port.

The Vmate cartridge simply slots into the top of the device and is secured by two magnets mounted on the bottom of the pod. As there aren’t any buttons, the Vmate E has a simple auto-draw function with a puff pressure regulation. The wattage (up to 20W) automatically sets to the cartridge in use to get the best possible vape from the resistance of the cartridge inserted. 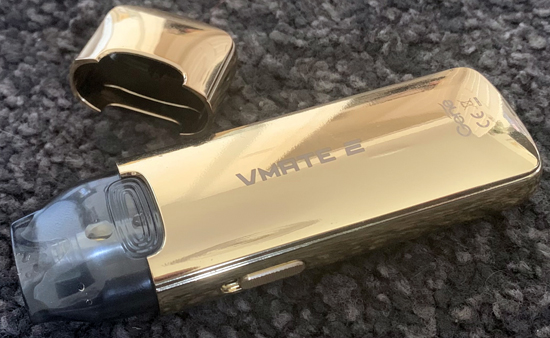 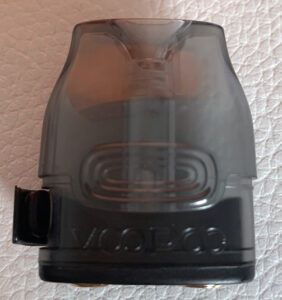 Two cartridges for the Vmate E are supplied in the kit. One has a resistance of 0.7Ω for an MTL or a restricted DTL vape and the other is a 1.2Ω for MTL. The cartridges are in smoked PCTG and have an E-liquid capacity of 3ml (this will no doubt be 2ml for EU countries).

These pods have coils sealed inside so you will need to purchase complete cartridges for replacements. To fill with E-liquid, just pull out the rubber bung on the side at the bottom, fill, and then just pop back in the bung.

On the base of the cartridges are two large magnetic plates that connect to the Vmate E device, as well as dual leak-proof air inlets, that line up with the airflow control on the device when inserted

The cartridges for the Vmate E are a version 2 to what was on the original Vmate release and are also compatible with the Vmate Infinity Edition and the V Thru Pro in the Voopoo V range. Also, the V2 pods will work on the original Vmate, as discovered by Jen in her Vmate Infinity Edition review. With its silver ion mouthpiece, Voopoo claims the V2 pods use 5A freshness-seal technique which means its Anti-Dust, Anti-Light, Anti-Volatile, Antioxidant and Anti-Bacterial.

As far as smaller pocket-size pod kits go, the Vmate E is a decent little device. Although primarily a mouth-to-lung kit, you can get a very restricted direct lung vape from the lower resistance coil and open the air slider to wide open. As expected though, you are not going to be winning any cloud competitions with it 🙂 The newer V2 cartridges are good for flavour and also the anti-leak works as I haven’t had any leaks at all with them, and only really minor condensation on the 0.7Ω pod. The auto draw works well and is very responsive on the puff.

The device lasted just over a day on the battery before needing a charge again with quite consistent vaping all day and evening. For its size, the 1200mAh is a decent internal battery and I have seen lower on bigger kits, so another plus point there for the Vmate E. To fully charge from a flat battery, it was 45mins in total, so a reasonably quick charge there via the Type-C cable.

The removable cap on top is also a good touch. Not only fitting nicely with the design, but it protects your cartridge and juice inside. Especially in Summer, in hotter weather, I find tanks and pods left around can lose flavour. With the cap on, showing just the smoked window on the cartridge, the E-liquid for me seems to keep its flavour more. Add to that, it’s good to throw in a pocket and keep the cartridge and mouthpiece protected.

I can’t comment on the other colours available for the Vmate E, but this white and gold device looks very classy, almost like a Voopoo V Thru in a wedding dress! Against other kits of similar profile, it looks very sophisticated and wouldn’t look out of place in Patsy Stone’s handbag!

If you are looking for a little kit to carry around, maybe to take to the local bowls club or just venturing out to watch some Horse Polo, then the Vmate E is definitely worth a purchase. It would look good sitting on the table beside a side serving of Caviar and a Peach Daiquiri but more importantly, offers a very good vape, decent flavour and long battery life.

Visit the links at the start of the review to head over to Voopoo to pick up the kit or alternatively, check out your local or online Voopoo stockist. Thanks for reading!