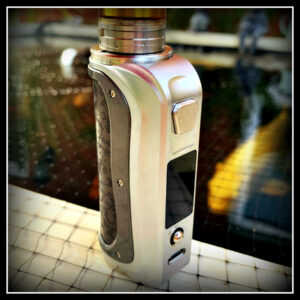 A review today for a device that is seen as pretty high quality within the vape market; this is the SL Class V2 by Yihi SXmini. This device is an updated version of the popular SL Class device released by SXmini a good few years ago. This range of devices is built on a reputation of using reliable and precise Yihi chips and superb build quality and design. You can check out SXmini on their website in the links above to see more about the devices.

So let’s have a look at this latest SL Class V2 and see how it runs.

The SL Class V2 comes in a flip-open white cardboard box with an outer card sleeve. On top of the sleeve includes the brand and title as well as a picture of the device. At the bottom is a large printed Nicotine warning; again, TPD rules which brands are pushed to include as you won’t find a drip of Nicotine in the box.

On the bottom of the outer sleeve are the printed title, package contents, barcode and warning graphics. Again, at the bottom is a large printed Nicotine warning. The outer sleeve slides off revealing the main box which has an embossed ‘SX Mini’ on the top with ‘Innovation for you!’ printed underneath. On one side of the main box is a label containing the title, colour of the device inside, serial number and production date. Sticking the box together is an ‘SXmini – Authentic guaranteed’ printed sticker which also includes their web address.

The box flips open to show all the contents nicely presented in padding inside. The contents inside the box are: 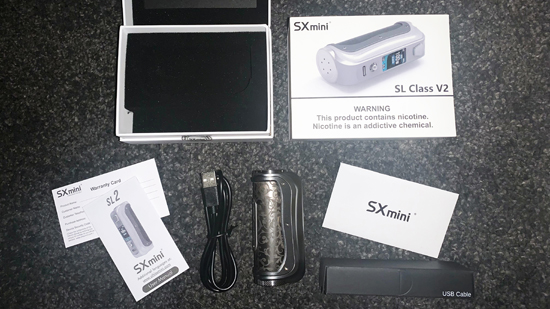 The SL Class V2 is a single battery device that can either run on a 21700, 20700 or 18650 battery (with the supplied adaptor inside the battery compartment in the device). It powers from 5-100W using the latest YiHi SX 730J chipset manufactured by SXmini. There are 3 power modes on the SL Class V2 which are Wattage, Volt and Temp modes. It can charge/update via the Type-C port on the front of the device with a 5V/1A max charge.

The size of the device is portable measuring 89.1mm in height, 30.17mm in width at its widest point and a depth of 42.85, again at its widest point. I say at its widest point because the device curves in towards the front of the device. Curving around the back is a design panel (this one is the ‘Tang’ version with branches and leaves design) where the battery is located inside, and a screwed-in ‘SXmini’ etched plate in the centre. The sides of the device contour into the front smoothly. On the front of the SL Class V2 is the main power/fire button at the top with a 0.96″ IPS colour display underneath. Below the screen is a small joystick to control the device settings and below that is the Type-C USB port. The device is rugged, built with Alloy and includes a waterproof chipset. It weighs in at 136g.

On the top is the 510 plate which can comfortably house up to 27mm atomisers without overhang and on the very bottom of the device is a screw-in battery cap with vent holes.

There are currently 7 colour options for the SL Class V2; Gunmetal Tang (as reviewed), Holy Silver, Mystic Grey, Fire Red, Copper Brown, Black Tang and Black. The colour represents the design panel on the back of the device. 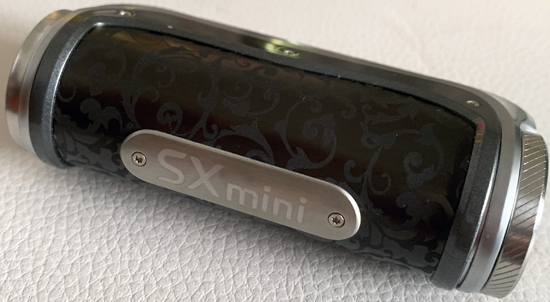 The YiHi SX 370J chipset running on the SL Class V2 gives a very wide range of settings as well as some personalisation for the device. To power on the device, press the main fire/power button quickly 5 times and you are greeted with a brief Sxmini opening screen before the main display loads. 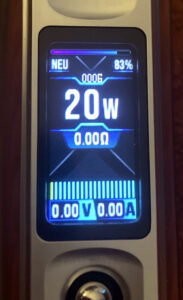 The display shows all the details you need on the main screen. In large text across the middle is the current power. This can be adjusted up and down easily by pressing down on the joystick once and then pushing it up or down direction to your required power. The same way also applies to temp control to set the temperature preset. Then just press the fire button to lock it in and exit.

To access the main menu for settings, press the fire button 5 times or push right on the joystick for 3 seconds. Here you will find quite an extensive menu: 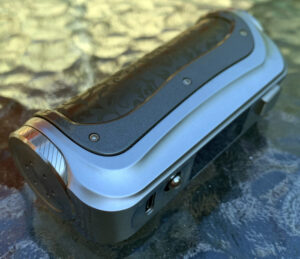 The ‘Set Room Temperature’ tweak I was confused about at first, so asked David at SXmini and it basically is an intelligent function connected to temperature control and is a recorded starting point for heating the coil. If the room temperature is set at 22c as an example, the chip uses this as a headstart for heating to the temperature set. Pretty innovative huh?

As for the Curve function, this setting applies to both power mode in watts, volts and temp control mode. To set Smart Curve Modes, press downwards on the joystick and then push down the joystick to select between Neutral, Soft, Strong or SXi-EQ. Press the joystick down again to lock in the selected mode and exit.

If you select the SXi-EQ mode, you can edit the curve configuration which includes time intervals and raise or lower power/temperature.

As mentioned above in the main settings menu, the SL Class V2 caters well for Temperature control mode using 4th Gen Temp control. Select ‘Temp’ in the mode menu and here you can choose 2 options in modulation which are Constant (strict temperature limit) or Dynamic (fluctuating limit just above or below set limit). Within the setting, you can also select the wire and lock the resistance.

In temperature control, you can also use one of the 5 quick presets, these are; Cold, Cool, Normal, Warm & Hot. You can also adjust the power and temp limit to your required level.

I’ve been using the SL Class V2 consistently every day for the last few weeks and it really is a brilliant device. Aesthetically it is flawless and a really strong build with its curves and contours in all the right places. The design panel around the back looks good in a more subtle way than other similar single battery mods (this is just a colour on other versions) with a strong screw-on alloy battery cap sealing the battery inside. Up top is a large 510 plate that will house even larger atomisers without problems. 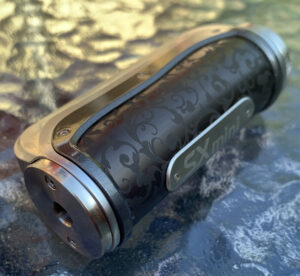 The Menu on the SL Class V2 is easy once you learn it and pretty much plug and play once you have it set up how you vape. Temp Control vapers are very well catered for also with this device, in a market where some mods now even fail to include Temperature Control at all. The display screen is very clear despite the text being quite small to fit everything on the screen.

On the vape, the SL Class V2 is a joy to use. It is lightening responsive on the fire and you can cater the vape exactly how you want it. It can handle higher wattages easily (Up to 100W) and even lower wattages in MTL gives a consistent vape with very good battery life. In fact, using the same battery in this as another single battery mod, the battery lasted substantially longer in the SL Class V2. I can only put that down to the reliable and well-functioning YiHi chips.

Speaking of YiHi chips used in the SXmini devices, there are a lot of hobbyist vapers that prefer these to the Evolve DNA chips, which just shows how good YiHi are.

One thing that really sticks out to me regarding SXmini is that they are not jumping on the bandwagon just releasing mod after mod with very few changes. Both this newer SL Class and the G Class V2 (released at the same time) are some years after the original first versions came out. This shows that they are serious about improving their design and taking time to do that before putting them on the market. This sets a standard for how other brands should work. Top marks for that.

So if you are in the market for a higher-end device that will last, has a hugely reliable chip with nice features and cosmetically looks amazing, you must go buy the SL Class V2 from SXmini now! You will not be disappointed!

You can pick up the SL Class V2 from SXmini directly from them via the links at the start of the review. If you are UK based and would like to order closer to home, I know Ecigone currently have these with a discount making them £88.99 at the time of writing. Thanks for reading and my grateful thanks to David at SXmini.