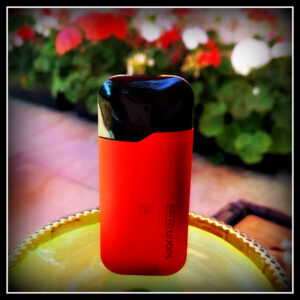 A review for a little pod kit today and this is the Air Mini by Suorin. This was supplied by the folks over at Youmeit vape store. They are direct stockists for Suorin products as well as Vapsi and Quawins disposable vape ranges. Youmeit also offers online support so you can give them a shout directly on their store if you’re stuck or need advice, and there is also free shipping on orders over $50. Based in China but shipping worldwide, they are definitely worth checking out if you are in the market for any Suorin devices.

So, let’s dive into the Air Mini kit and see how it runs!

The Air Mini pod kit by Suorin comes in a white cardboard box with a slide-up lid. On the top of the box is an embossed image of the Air Mini kit with printed branding and title above and below. At the bottom of the top of the box is a large printed Nicotine warning as this is the TPD kit for EU countries. On the left side of the box are printed warnings, batch number and production date. Over on the right side are a printed ‘Suorin Air Mini’ title and a warning label. The top side of the box simply has printed Suorin branding and logo.

On the bottom of the box are printed warnings, package contents, contact info, a web address for Suorin and a QR code for their Instagram. Two labels are stuck on the bottom too which are a scratch-for-authenticity panel and the barcode which also includes the colour of the device inside. In this case, it is a Red Air Mini kit.

Contents inside the box are: 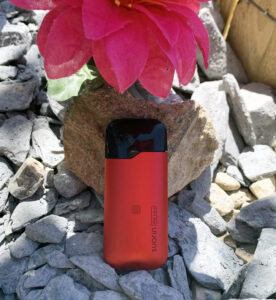 The Air Mini is a tiny device measuring 75mm in height, 32.3mm in width and a depth of 13.7mm. It’s a light pod kit weighing just 76g. It obviously runs on an internal battery which is 430mAh with a max output of 14W.

The device is literally a plug-and-play having no screen or fire button and relies on an automatic draw. It’s a simple small device with a glossy-coloured tough Alloy body with ‘Suorin Air Mini’ printed on the front and a grilled small middle section for the RGB LED in the middle. On each side near the top is a small air hole for airflow on the device, which gets brought in and flows under the installed pod. At the back of the device is a printed CE stamp as it’s the TPD version. On the bottom of the Air Mini is a Type-C charge port and at the top is where you add the pod/cartridge connected via 2 small magnets.

The LED shows 3 different colours that light when vaping and charging the device. Green shows 75%-100% battery, Blue light is 40%-75% and Red for 0%-40%. Not only when vaping or charging but the LED will also light when you add the pod to give battery and installation indication.

Charging the Air Mini is listed as 30mins from a flat battery, but I found it closer to 45mins, though that was via a laptop. The charge current is 1000mA so is a fast charge.

The Air Mini device is available in many colours; Red (as reviewed), Diamond Blue, Light Blue, Rose Gold, Gold, Mint Green Silver and Black. There are also another two with designs of the American flag in Star-Spangled Red and Blue. 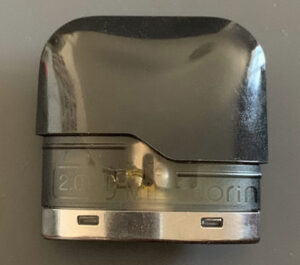 The pods for the Air Mini are cartridges with built-in coils of 1Ω resistance. One cartridge is supplied in the kit. They are smoked PCTG with an Alloy base that connects to the Air Mini device. The E-liquid capacity for the pods is 2ml and refilled via top-filling.

To fill or refill, click off the top black drip tip part of the pod to reveal 3 holes underneath. The middle one is for vaping and is directed into the coil so do not use this to refill and use the one on either side. Simply put in the nozzle from the E-liquid bottle and fill up to the max line indicated in the middle of the pod window. There is also a ‘minimum’ line so you can easily see when you need to refill again.

Once filled for the first time, leave the cartridge upright for 5-8 minutes before vaping to make sure the juice has saturated the cotton first to avoid burning the cotton and dry hits. Suorin advises replacing the cartridge in the device every 7 days, but that really is dependent on how much you vape.

On opening the box, it was a bit deflating to see something about credit card length and it left me wondering how this would find enough power to give a decent enough MTL vape and good battery life. I was wrong! – I haven’t been able to put this thing down since I started using it over a week ago. In fact, I would go as far as to say it is probably my favourite small pod device of recent times.

The vape from this is smooth, consistent (even when with lower battery power) and gives a very considerate amount of flavour on a few different flavour profiles I tried. Normally some smaller lower-power pod kits struggle somewhat with Desert flavours but these Air Mini cartridges paired with the device, really do hold their own. I even got away with wicking an 80VG E-liquid in the cartridges without any dry hits, so I know they are more than ample to wick anything lower than that.

Aesthetically the Air Mini is appealing for something so small with its glossy finish and is strongly made. It’s a simple device that would appeal to Cigarette-quitters to run something a bit higher in Nicotine or salts in the pods. Equally appealing to vapers that want something to throw in the pocket and give a decent MTL vape when needed. At 1Ω and 14W, sure, you can try a direct lung vape but it would be like sucking a melon through a straw. Mouth-to-lung vaping is where this shines and for that, it shines very well.

Since using the kit, I’ve had zero leaks at all from the cartridge, none whatsoever and even zero condensation on the bottom of the pod, so Suorin has done something very right with these. One little point regarding the cartridges; only one is supplied in the kit, so you’ll pretty much need to buy replacements straight away. Further to that, I can only see them sold separately and not in packs of 3 or 5 like usual. Maybe it is just a little price to pay for a very good little pod kit. I would recommend it for sure!

To pick up the Suorin Air Mini kit as well as the cartridge replacements, head over to the Youmeit shop via the links at the start of the review. This kit is currently just $19.99 over there! My thanks to Chilly and the gang at Youmeit, and also for the try-out of one of their Vapsi disposables also available in the store.