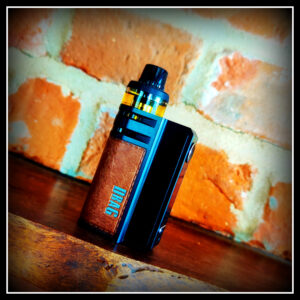 Today, we have something different from Voopoo. Yes, I know it is another in their Drag series, and there’s been far too many already, but the most notable difference of this kit is its deviation from the cylindrical form factor known in the Drag pod kits. Indeed, we shall be having a look at the Drag E60 Kit by Voopoo!

This kit was sent to me for review purposes by Voopoo (much love, Nical!).

To be fair to Voopoo, they did kind of put on the brakes a little bit by adding kits into their Drag line. There was a point last year when even I thought they were churning them out too quickly, like a new Drag kit every 2 months!

Several months passed, and the last Drag we reviewed is the Drag Q, which is also quite unique to the series being an MTL kit. The Drag E60, however, is really a DL kit and a very interesting one at that. Shall we have a look then? 😊

As always, this review is from my own genuine experience of using the product as an average vaper.

The Voopoo Drag E60 came in a box that contained:

The kit comes in a very nice box, which appears to be themed to match the mod colour (brown and black box for the Coffee kit I received). The usual device features, manufacturer information, and socials are written on the packaging as expected. An inner box slides out that has a boxed compartment for kit accessories atop a plastic tray that contains the kit itself. The presentation is simple yet classy which is a pro for me. However, for the small size of the kit (see my measurements above), I did feel that Voopoo could have gotten away with less packaging used.

A. PNP Pod II and Coils

Now, what do we have here? Quite a few PNP pod versions have come and gone, and whilst they were game changers, they were not problem-free. Enter the PNP Pod II which, quite frankly, is my ideal kind of pod! Let’s take a deeper look…

The pod itself is clear which makes eyeing E-liquid levels no effort at all. The coils (still) press fit from the bottom, but everything else about the pod has been re-designed! Starting with the new presence of a top cap that seals the pod securely and covers 2 nicely-sized e-liquid filling holes. These holes are covered by silicone too for added leakage protection. Granted, the drip tip is not removable and the cap itself is made from plastic, I still think this pod is already a million miles better than previous PNP pods. No more rubber bungs! 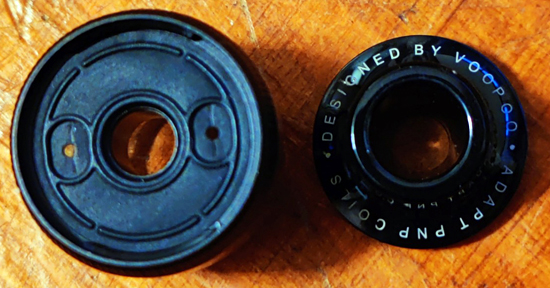 Speaking of the drip tip, it is on the tall side for DL but has a wide bore and is very comfortable to use. Another re-design I noticed is that with this new pod, the coil sticks out at the bottom way more than in previous pods. And that takes me to my next point: although these pods will accommodate any PNP coil, they cannot be used with previous Drag pod kits. I tried to install it on my Drag X, for example, but the pod is of different size and the coil sticking out more means that it will not attach securely on the Drag X mod. Some people may not like this (as Voopoo has been very good to us with backwards compatibility of device accessories), but with all the positives that come with the PNP Pod II, I feel that this is a good shift in direction and a necessary change for product improvement and innovation.

Needless to say, I am a fan of this new PNP Pod II!

Coming to the coils, the PNP coil platform is everywhere and renowned globally. And so, it is a major pro in my eyes that Voopoo made the PNP Pod II compatible with the entire coil platform! However, the Drag E60 did come with two new coils under the PNP platform: 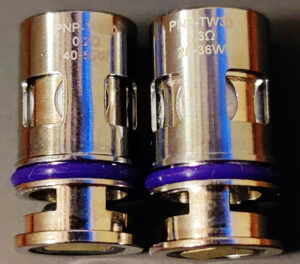 The PNP-TW20 0.2-ohm mesh coil (40-55W) was first to be tested and it performed beautifully. It gave me amazing flavour (8.5/10) and dense clouds, all very good things for my vaping experience! I vaped this coil at 55W with the airflow fully open and sometimes pushed it further to 60W as the coil could keep up. This coil is actually a great match to the E60 mod, even if the mod limits its output voltage to 4.2V.

The next coil to test is the PNP-TW30 0.3-ohm mesh coil (28-36W) which also gave a very decent flavour (8/10) albeit with a cooler vape, owing to its higher resistance/lower wattage range. Saying that though I did try this coil at 40W and it worked absolutely fine. I vaped with this coil with the airflow halfway closed to maximise warmth and to get a nice restriction to the draw.

What’s new with these (also new) coils is what Voopoo calls Dual in One Tech, which they claim to give superb flavour and clouds whilst utilising less than usual e-liquid. I can’t really explain the specifics of this technology, but Voopoo’s claim is actually true per my testing. I was impressed with how the coils managed my e-liquids so efficiently without sacrificing flavour!

Did the coils leak? Absolutely not! Sure, there will be some inevitable condensation, particularly on a warm day and vaping it at 55W or so, but nothing that I would characterise as actual leaking from the coils or from the pod itself. There was no coil flooding either, which again represents a step-up for me as compared to previous PNP pods!

The Drag E60 device is a step away from the Drag pod kits of the past, mainly with its boxy shape and small size. It has a smoothly finished metal frame that is accented by a patch of leather, making the mod feel so nice and natural in the hand. It is also amazingly small and relatively lightweight for the amount of battery capacity it carries, which makes it very impressive! 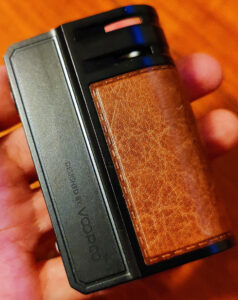 Voopoo has never been one to shy away from big and bold branding, but with the Drag E60, Voopoo appears to have practised some restraint with “Drag” only appearing on one side of the leather patch and not much else on the mod. There is also minimal branding printed on the top cap, which actually makes it look cool rather than tacky. These observations actually made me smile as they were welcome changes in my book!

Up top is the pod cradle where the coil contacts are as well as the base made into a basin for two main purposes: to concentrate flavour and to catch condensate for easier cleaning. Both of these I can attest to, as you’ve seen in my feedback of the coils, and the fact that it only took me a couple of tissue dabs to clean off condensate. Another win for the Drag E60 here in my eyes! 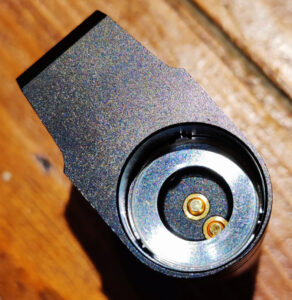 Airflow control is also around this portion of the mod. Now, I’ve seen pod-controlled airflow regulation systems before, but this one from Voopoo is done rather cleverly! Airflow is regulated by twisting the pod in either direction, which then initiates the movement of a metal ring (with no stops) that covers or exposes 2 cyclops holes underneath the pod. The pod is needed to turn the metal ring, thus if you put the mod in your bag, there is minimal risk of movement of the airflow control system. It stays where you’ve set it. Pretty cool, huh?

The front of the mod has the fire button, coloured screen (about 1.3” per my measurements), up and down adjustment buttons, and a USB-C port. The screen was actually larger than I expected which is a positive thing for me (I do like my coloured screens!). It displays expected vaping data such as battery life both as a diminishing bar and percentage, power level, the mode selected, ohm load, voltage, duration of puff, and a 5-digit puff counter. Voopoo really did maximise the screen real estate here which is really good!

The buttons are clicky with actually no discernible play, which is impressive given that I am reviewing a sample unit. Operating the mod is very simple: 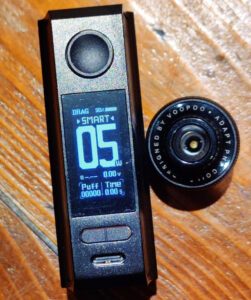 So, this is where I do have some nigglies about the Drag E60 which I hope Voopoo will address in a future software update. There should be a way to lock just the adjustment buttons but still keep the fire button functional. After all, if you wanted to lock all buttons, well, you can just turn the mod off. Also, I didn’t find any way to adjust the screen brightness, which may be a thing to consider for those who may find the screen a little too bright. Did these observations hinder my use of the kit? Absolutely not! However, they are quite nice and handy to have.

For the mod modes, the difference between Smart and RBA is that the Smart mode limits the maximum power to the coil based on its resistance as safety and coil-saving feature, whereas the RBA mode does not limit the power and is intended for experienced vapers. Eco mode, according to Voopoo, is an option to extend battery life by increasing vaping puffs by 10%. I suppose it limits the power going to the coil to save battery. This mode gets displayed once your battery reaches 40% so that this option is presented, however, you can inactivate this within the menu, or indeed activate even before hitting 40% battery life.

The modes included in the mod are meant for simplistic vaping, with Voopoo going for minimalism all around as far as the Drag E60 is concerned. Sure, it doesn’t have TC, bypass, or voltage, but realistically and for most vapers, wattage vaping is enough to satisfy their needs.

Being a Voopoo product, this mod fires very, very quickly with full power to the coil from the first puff! This is where Voopoo has become reliable and sets them apart from the competition: this feature from their proprietary chip. Saying that though, battery drain was actually pretty good when I was vaping at 60W, for example. I got a good day’s use out of the mod before needing to recharge it. And recharging doesn’t take very long at all with its 2A fast charging.

Another unquestionable Yay from me for the Voopoo Drag E60! It is a welcome and nice addition to the Drag series, offering a different form factor which performs just as well, if not better than previous Drag pod kits.

Some may find the mod to be too simple, but I’ll argue that it will fulfil the needs of the average vaper who DLs at 60W or below. And the PNP Pod II is like a breath of fresh air in the pod mod game, being leak resistant and having true top-fill!

My sincerest thanks again to VooPoo for sending this kit for my review! To pick up the Drag E60 kit or to find out more, head over to Voopoo via the links at the start of the review.