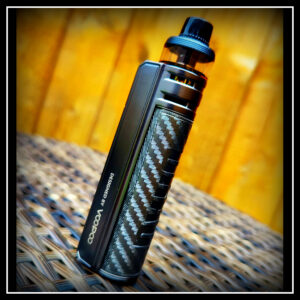 So, alongside the Drag E60 Kit (whose review is also on the blog), Voopoo has also kindly sent me another addition to their Drag series: the Drag H80 S Kit (thank you, Nical!)!

Now, this kit is more in line with the previous Drag pod kits we know from the last few years. Indeed, from Drag X onwards, I am talking about the cylindrical and tubular pod mod kits Voopoo has become known for.

The Drag H80 S Kit does come with significant changes when compared to the Drag X, so at least in my eyes, this new kit is not an update made with incremental improvements (ala Apple of the mobile phone world), but rather a significant overhaul!
Let’s get down to it then, shall we? 😊 But before we start, I already want to mention that there are some commonalities between this kit and the Drag E60, so please refer to the Drag E60 review as well (I will reference this review throughout!).

As always, this review is from my own genuine experience of using the product as an average vaper.

The Voopoo Drag H80 S came in a box that contained: 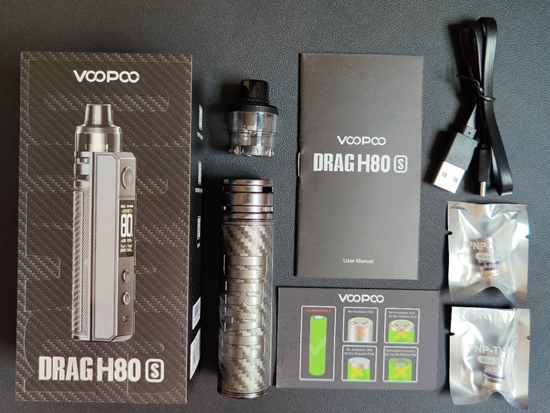 I don’t know if all the Drag H80 S kits will come in the same box, but the one I received was quite exquisite, I must say! The outer sleeve is done in a carbon fibre pattern, in line with the Gray Carbon Fibre mod I received. The usual device features, kit contents, manufacturer information, and socials are written around this sleeve. An inner box slides out that has a boxed compartment for kit accessories atop a plastic tray that contains the kit itself. I’m really digging this matchy-matchy presentation as it adds to my new gear unboxing experience!

A. PNP Pod II and Coils

I gave an extensive review and run-through of the PNP Pod II in my Drag E60 Kit review (again, also published on the blog). I do ask that you refer to that for more details, but in a nutshell:

For the coils, my feedback on the PNP-TW30 coil can also be found in my Drag E60 review. But, if you want a “TL;DR”, it’s a great coil for low-wattage DL vaping, that packs loads of flavour and clouds! 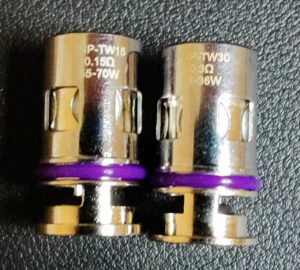 Another new coil added to the PNP platform, which is introduced with the Drag H80 S, is the PNP-TW15 0.15-ohm mesh coil (55-70W). Of the 3 new PNP-TW coils Voopoo has released, this one has to be my favourite by far! It gave me awesome flavour (8.5/10) and dense clouds without necessarily needing to go to its recommended wattage limit. Indeed, most of the time I found myself vaping with this coil at 65W with the airflow fully open, and that was plenty warm, flavourful, and cloudy for me. I also did try to push this coil to 75W, and the coil can indeed keep up. But 75W doesn’t give me any more flavour or satisfaction, hence I was vaping this mostly at 65W as I mentioned.

The coils coming with the Drag H80 S also have what Voopoo calls Dual in One Tech, which they claim to give superb flavour and clouds whilst utilising less than usual E-liquid. And indeed, given the superior flavour I got from the coils, I was really surprised that these coils were using up my E-liquid with discretion!

As with the other new PNP-TW coils, the PNP-TW15 also didn’t leak (or flood) on me. Perfect for walks in the park where I can DL to my heart’s content and not worry about E-liquid getting everywhere!

The Drag H80 S is, quite honestly, a sight to behold! With its smoothly finished metal frame combined with the carbon fibre finished PC, it looks well classy! At 122g, it’s not the most lightweight pod mod on the market, but there is something reassuring to its weight and feel in the hand. The rounded curves around the mod and the placement of its operation buttons make it very ergonomic too.

With branding, Voopoo has done pretty much what I expected and is in line with previous Drag pod mods, with “Drag” embossed in big letters across the carbon fibre (looking) panel. But, since it is done in the same colour as the panels, it looks a little more discrete and just adds to the “Voopoo-ness” of the product. 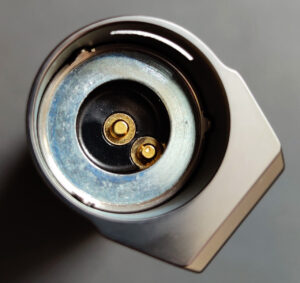 Up top is the pod cradle where the coil contacts are as well as a sort of basin to concentrate flavour and to catch condensate for easier cleaning. Airflow control is also around this portion of the mod. Airflow is regulated by twisting the pod in either direction, which then initiates the movement of a metal ring (with no stops) that covers or exposes 2 cyclops holes underneath the pod. The pod is needed to turn the metal ring, thus securing your airflow position in place at all times.

Compared to the Drag X, Voopoo has completely changed up battery installation with the Drag H80 S. As a welcome change in my eyes, we now have a magnetised battery door instead of a slider! This battery door is made from metal with the design panel glued over it. It is very secure and stays on the mod, with no play whatsoever which makes it quite impressive! Cell polarities are clearly marked, and you just need to slide your battery in, put the door back on in any which way, and you’re done! 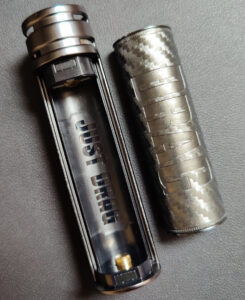 The mod’s base is rubberised for mod and surface protection, which is always nice to see. What I didn’t see though are battery vent holes, but I am assuming that the battery will vent where the USB-C port is.

The front of the mod has the fire button, coloured screen (about 1.3” per my measurements), up and down adjustment buttons, and a USB-C port. The screen displays expected vaping data such as battery life both as a diminishing bar and percentage, power level, the mode selected, ohm load, voltage, duration of puff, and a 5-digit puff counter.

The buttons are clicky although with some slight play, which may be due to them sticking out a little more than usual. Bear in mind though that I am reviewing a sample unit, and this might not be the case in the actual retail ones. Operating the mod is very simple and very similar to the Drag E60 (same modes, everything!), but in short: 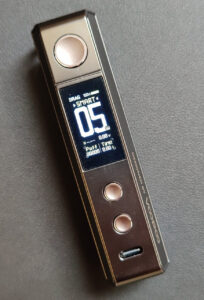 Being that it has the same UI as the Drag E60s, that means I do have the same niggles about having no way to lock just the adjustment buttons or adjust screen brightness. I really hope Voopoo release a software upgrade soon to add these options.

Smart mode limits the maximum power to the coil based on its resistance as safety and coil-saving feature, and the RBA mode does not limit the power and you are free to adjust power as desired. Eco mode is an option to extend battery life by increasing vaping puffs by 10%, at least according to Voopoo. A prompt for this mode will be displayed once your battery reaches 40%, but you can choose to use or decline this option. You can even activate Eco mode even before hitting 40% battery life if this floats your boat!

As a Voopoo mod with its proprietary chipset, this mod fires lightning quick and with full power to the coil in a split second! You won’t be disappointed if you like full-on, powerful hits from vaping start. Battery drain was as expected with the cell I was using; I got to about probably 100 puffs at 65W before hitting the 60% battery mark. Recharging doesn’t take very long either with its 2A fast charging, but I will always recommend using an external charger for safety and battery longevity.

The Drag H80 S represents a major overhaul and improvement over the Drag X for me, and for that, I give it a very enthusiastic Yay! I recommend this kit for those who love the Drag X or Drag pod mod series, or for vapers wanting to explore sub-ohm vaping. With the kit being so easy to use and maintain, and the fact that it gives terrific flavour, warmth, and clouds, you can’t really go wrong with it for DL vaping! It would also be a good backup device for the experienced vaper or hobbyist, given the powerful hits it gives.

My sincerest thanks again to Voopoo for sending this kit for my review! To pick up the Drag H80 S Kit or find out more, head over to Voopoo via the links at the start of the review.