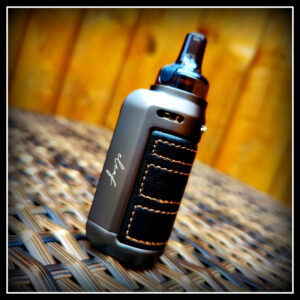 For my second Eleaf review, ever, we will be looking at one of their latest and greatest: the Eleaf iSolo Air 2!

This kit was kindly supplied to me by Eleaf themselves (thanks, Tolkien!). Eleaf has been around and in the vaping game a fair while, and remains to be an influential and major vape hardware producer in the world. They manufacture a wide range of vaping products, from disposables to sub-ohm kits.

The Eleaf iSolo Air 2 is their latest gambit in the MTL/RDTL pod market. In this review, we will take a look at features unique to this kit, and whether they will fit varying vapers’ needs.

As always, I will be reviewing this kit as an average vaper, as most in our community are.

I was sent what looked to be sample packaging of the Eleaf iSolo Air 2 Kit that included:

Yes, the “black coil” thing did pique my interest too – the coil shells do appear as black-ish of sorts, but not fully black as one might expect. I had a look through Eleaf’s website but couldn’t really find any technical advantage to having black-coloured/blackened coils, so let’s see how they’ll perform! 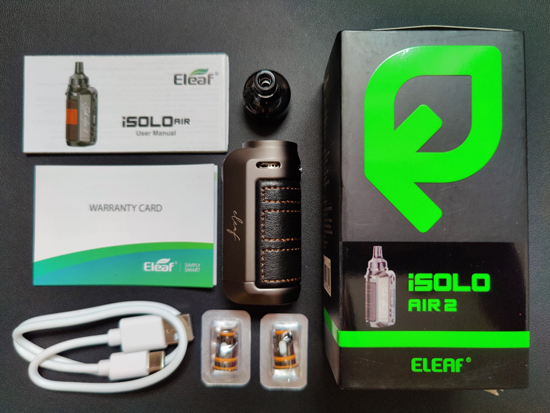 The kit comes in a black box, made up of an outer sleeve and an inner box. This outer sleeve has loads of big and bright branding, I must say. I suppose the goal is to stand out on shelves but I do feel like it was overdone a little bit; it looks a little disorganised in some parts. A photo of the device is at the face of said sleeve, with kit features, contents, and manufacturer information printed around it. The kit itself sits inside a foam tray, underneath which lies the kit accessories.

All in all, quite a compact way to package the kit!

I have to say that this device is a beauty! It has a smoothly finished metal C-frame, complemented by the stitched leather making up the part where you would normally grip a kit. These 2 main elements combine extremely well and help with the classy look of the kit. Not only that, these make the kit feel so nice in the hand – like it just belongs there! And, with its small size, it’s definitely pocketable and easy to take anywhere. 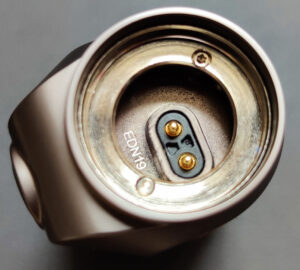 Branding is also nicely done, with the brand and kit name printed on either side of the metal frame. One can argue that the fonts used for branding are on the large side, but I can understand this given the diminutive size of the kit itself.

Up top is a cradle where the pod sits securely via strong magnets on the pod. This portion also has the coil contacts and airflow control system. There are two main openings on either side of the metal frame for airflow, and sliding the knob, either way, rotates a metal band with holes of varying sizes to help regulate the amount of air coming into the coil. With this system, I was indeed able to achieve a tight MTL, and on the other end of the spectrum, a DL draw with nice restriction.

Despite this very effective and smooth airflow system though, I do feel that Eleaf not including auto-draw is a definite missed opportunity, especially as the device can handle tight MTL. Also, this miss kind of pegs back the iSolo Air 2 a little for me, taking into account that this kit’s competition in the market these days usually offers both button and auto-draw firing. Saying that though, button firing didn’t introduce any problems.

The mod’s base has vent holes for battery safety. At the front of the mod is where the fire button, screen, adjustment buttons, and USB-C port are located. The buttons are very tactile and clicky, with little to no play on them. The screen is quite bright and displays battery life, power level, ohm load, and the number of puffs. It is indeed a relatively simple screen, but this is well in line with the device itself as you will see more as we delve into mod operation.

Operating the mod is very easy: 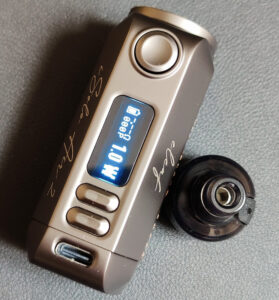 Performance-wise, the mod fires really quickly and with no discernible lag. Battery life easily lasted all day in MTL vaping at around 15W which is pretty impressive. The mod does charge very quickly too. Saying all that though, one thing I need to mention is that the mod, unfortunately, gives inconsistent ohm load readings. This can be a con or nothing at all depending on how you look at it: the mod does suggest wattage depending on the coil used, but you are still free to adjust this wattage as you please since the mod doesn’t lock a max limit.

Wattage can be adjusted in 0.1W increments up to 20W, and then in 0.5W increments beyond that. The wattage selections do not round robin, though, so always check your wattage whenever pulling your kit out from your bag or pocket. 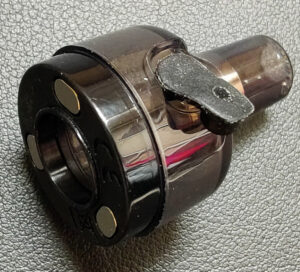 The pod is made with quite heavily tinted plastic which unfortunately does make E-liquid levels challenging to see, especially in low light. It installs into the device with a push (and therefore you’ll need to pull it out to remove it) which secures it in place.

The round drip tip is fixed to the pod and narrows towards the top. For MTL vaping though, it’s still wider than what I would normally use, and so I kind of wished that Eleaf split this part into a pod and removable 510 drip tip so that an MTL vaper can use an MTL drip tip, and an RDL vaper can use a wider 510 drip tip. Nonetheless, it was still comfortable enough for me to use in medium MTL.

The side-fill port is sealed by a rubber bung. The refilling hole underneath this bung is big enough for most E-liquid bottles, so you shouldn’t have a problem refilling with this pod.

The coils press fit from the bottom of the pod, and impressively, I’ve had no leaking issues with either coil! And speaking of the coils… 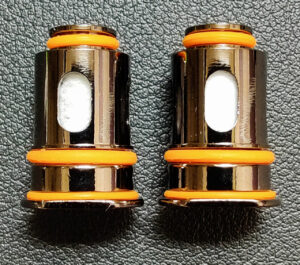 The GTL 0.8 ohm mesh black coil (12-18W range, made with Kanthal) performed superbly with great flavour (8/10). Even though it’s technically sub-ohm, I used this coil mostly at MTL due to the impressive warmth I got from it, combined with having just 2 pin-point holes exposed in the airflow control. This coil was giving me bags of flavour even at just 15W! The taste was crisp and pure, and just very enjoyable. I recommend using 50/50 VG/PG e-liquids with this coil to get the best out of it, although some thin 70/30 e-liquids might be alright given the generous size of the wicking holes. Can you pull a RDL vape with this coil? Yes, it is possible with all airflow holes open!

The GTL 1.2 ohm mesh black coil (7-13W range, also made with Kanthal) provided a nice MTL experience as well. It is with this coil that one can get a really tight MTL (if that’s what floats your boat!). I used this coil at 12W, for that right balance of flavour and warmth. Flavour is awesome as well from this coil (7.5/10), and I would suggest using 50/50 VG/PG e-liquids with this coil, mainly due to its lower wattage range.

Now, the “black” coils… being perfectly honest, I didn’t really feel any significant advantage to using black coils. Don’t get me wrong, these coils are superb and compete very closely with similar coils of other brands, so perhaps the black colour of these coils is just more for aesthetics rather than performance.

The Eleaf iSolo Air 2 Kit is a very decent and portable kit to use, especially for all shades of MTL vaping. For that, it gets a Yay from yours truly!

It looks quite handsome, kicks out some great flavour, and packs a punch both in power and battery life. Apart from it not having auto-draw (which is very subjective), it’s hard to find a deal breaker on this kit!

And that’s it! My appreciation goes again to Tolkien and Eleaf for sending this kit for my review! To pick up the kit or find out more about the iSolo Air 2 by Eleaf, head over to Eleaf via the links at the start of the review.